Joker plans to bomb all of Gotham and make it “one big dent”. Any police officer competent enough to know the implications of such a threat would immediately take the news to the authority that can ensure that everyone can make it out of the city safely. But this is Gotham PD… Commissioner Gordon IS the only competent cop of Gotham. The Mayor refuses to take his request seriously due to a frustrating lack of evidence. Batman and the commissioner decide to turn to the one person who really knows what the Joker is up to – Harley Quinn.

Now the reason this episode is among my top five is because of the sheer brilliance and novelty of Harley Quinn’s character as a whole. She’s been through it all; comedy, tragedy, self-reflection, and as well as some truly degrading moments at her Puddin’s side. In my opinion, she is the breakout character of this entire show. This episode is the Harley-centric episode of Harley-centric episodes, and it does it all with the treat of watching her team up with the moody, brooding Dark Knight.

Just take it in – Harley Quinn and Batman teaming up to stop Joker from blowing up all of Gotham. It’s absolutely ludicrous. It’s a fine example of character contrast, with Harley’s over the top enthusiasm and giddiness, complemented by Batman’s subtle but noticeable frustration with her (cue “DON’T. TOUCH. ANYTHING.”). Complemented magnificently by Kevin Conroy, Arleen Sorkin’s performance shines through as her best yet. You want her to succeed, and you want her to get away from the Joker, but you know that she can’t. 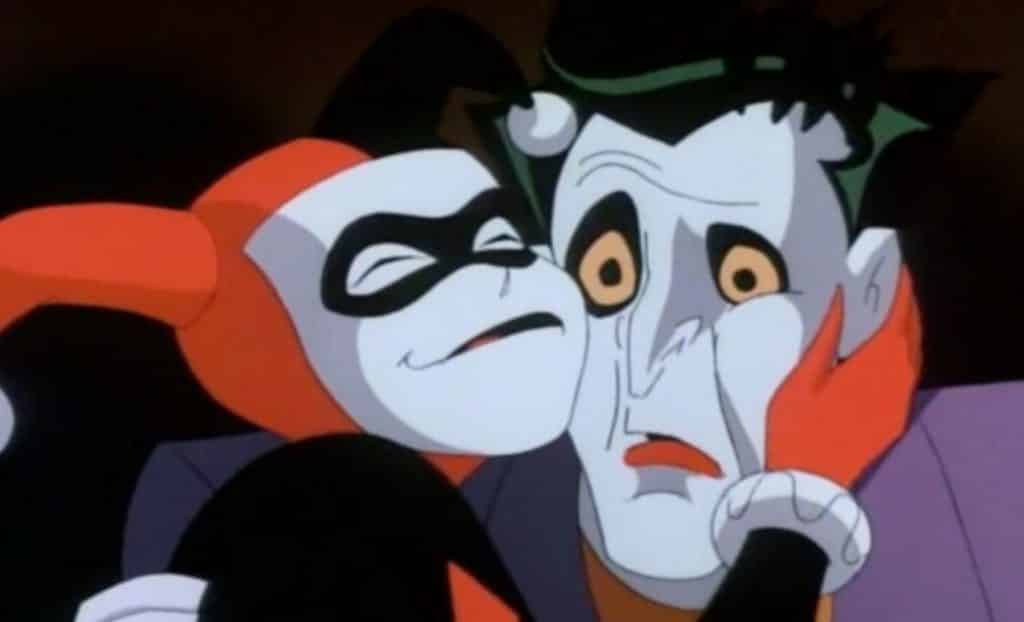 It’s that humor that makes the sadness of Harley’s love and connection to the Joker much heavier in the undertones of her episode. As it stands, she truly is the main character of this episode, and fully deserves the spotlight. It’s chock-full of brilliant voice performances, a heartbreaking story, and the Harley Quinn slapstick we all know and love.

4) THE MAN WHO KILLED BATMAN

What? Batman was killed?! BY A MINOR CHARACTER?!

Just the name of the episode is enough to get anyone to watch it. I mean, the show itself is called BATMAN: The Animated Series – the curiosity is too strong to resist, and you’ll find yourself watching it before you know it. The “murderer”, as it turns out, is a very meek, nervous, and cowardly thug; the type Batman himself wouldn’t waste a punch on. But who cares who did it. We all want to know how.

The actual brunt of the episode does wonderfully at living up to the title, telling a very sharp and well thought out story right from the get go. It elevates the significance of Batman and the Joker; the following of Sid The Squid throughout the episode enhances their reputations, their characters, and their motivations. The real highlight of the episode however is none other than our Clown Prince of Crime. We all know that Batman has essentially gotten every criminal out there to accept that Batman exists and will find them, regardless how tough or stealthy they are, but this episode is about Joker’s reaction to finding out that his arch-enemy, his other half, has seemingly perished.

We can see that the genuine sadness that the Joker emotes in response to Batman’s death is beautiful, in its own way, as it is supplemented by a hint of pure anger that is only just noticeable in the undertones of his dialogue. Mark Hamill has been regarded time and time again as the best voice actor of the show, and the way he abandons the psychopathic, theatrical tone when dealing with his loneliness is outstanding. It gives the Joker a whole new level of depth and feeling.

But we all know the obvious – Batman isn’t dead. One thing I wish they did a little differently was the anticlimactic “I swung away before it exploded” to his entrance. He dodged bullets, used a shuriken to great effect, and trashes a mob boss’ living room without even breaking a sweat. But that’s how the scum of Gotham see Batman, and now we got to see him as they do; ruthless, unrelenting, and as frightening as the night itself.

This episode is a direct counterpoint to the episode above. Now that we’ve seen why Batman is synonymous with fear through “The Man Who Killed Batman”, we now see why Batman is needed in Gotham through this episode.

This episode doesn’t focus on Batman. It focuses on your everyday Average Joe by the name of Charlie. He’s by no means a billionaire, and even less a crime fighter. However, he has something that is separate from our average everyday worries, and that is the fact that he is the target of the Joker. Why does that apply to us? Charlie is your average guy, as mentioned above. He is what we are in the show, and him being a focus allows us to visualize ourselves as a focus. Yes, the Joker is targeting an average citizen: us. 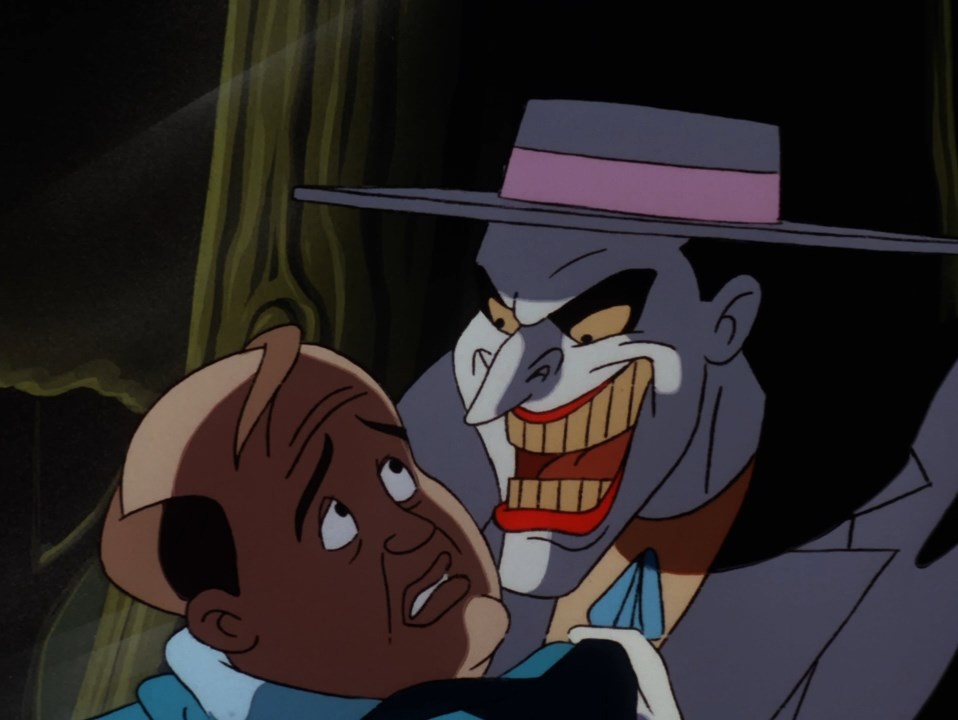 Through the eyes of Charlie, we get to experience just how terrifying the Joker truly is. He is purely Batman’s polar opposite, absolutely everything the Dark Knight isn’t. There’s nothing you can do, because you’re up against a criminal genius, and you have no idea exactly when he’s going to do what. The implications of witness protection mean nothing to the Joker, as he effortlessly makes his way to Charlie, and he… asks him to hold open a door. That’s what makes the Joker so great – he’s unpredictable. His plans are set up in the way the best jokes are: initialization, buildup, and concluded with a deadly punchline and as a bonus, he throws in the kicker.

Joker’s Favour is a comedy-filled adventure that increases the drama while making sure a crucial point is apparent; Batman is a crime-fighter whose feats stand among gods, yes, but the people around him are far from that. Batman’s greatest loss is his failure to save those around him from the terror that is Gotham’s criminals.

But the episode isn’t about Batman – it’s about Charlie, and the one who defeats the Joker is none other than Charlie himself. The average guy allows us to visualize us in his shoes, thwarting the plans of the greatest criminal mastermind Gotham has had to face. Charlie inspired us as he even got the Joker to run behind Batman for protection, albeit melodramatically and comically. It helps us believe in ourselves and realize we have the potential to do great things, even if we’re just average.

The best way to explain this episode is by being blunt and brutally honest. This episode has been the cause of tears and much thought. There’s no happiness, there’s no hope. There is only cold reality.

Harvey Dent is arguably the most human, yet most tragic villain that Batman has to contend with. From the get go, Harvey Dent is established as one of the heroes. He is Gotham’s star DA, a face the city knows and can trust, and the man who is responsible for putting many criminals behind bars. What pulls at our heartstrings the most is that we knew Harvey, and we watched him deal with the tragic reality of how corrupted this city truly is.

The reason I really love this episode is because of the reality and humanity behind it. Harvey Dent lost half of himself to his inner demon, and Batman has to turn against a valuable ally. But that’s where the beauty of the episode lies: there’s no such thing as a happy ending, and everyone loses. It’s up to us to live with that and move on.

This is a two-part episode that I can say, without a doubt, is the single best story in the entire Batman: TAS timeline.

This episode is about Batman, one of his greatest and most respected villains, the love of his life, and the truest test of his intelligence, skill, and will. Ra’s Al Ghul is the cleverest, deadliest villain yet, and Batman’s equal in wealth, cunning, intelligence, physical prowess, and more. It reinforces the weight of the villains in the Batman universe and just what Batman has to constantly go up against. He doesn’t fight criminals only to stand against corruption and evil, but also for justice, balance, and his fellow man. After the brief but passionate romance between Talia and Batman, he once again returns home to continue his mission, going on to show how devoted he is to his ideals; enough to even put them above his own happiness.

The story allows us to connect the dots and really dive into Batman; we see his skills in action, we feel his emotions, we believe in him. We don’t need to be told that Batman is clever, or dedicated, or driven, or that Ra’s is intelligent, ruthless, and cunning, or that Talia is beautiful and devoted. The episode shows us all of the above and more in spades.

The highlight of the episode(s) is the swordfight between Ra’s and Batman. Damn, that was a good fight. I mean, I love action as much as the next guy, but Batman was put to the test as his skills, reflexes, thinking, and character were all called into play. It’s as if the entire series came down to just one story, and this was that story. Deserving of the number one spot by far.

Plus, Ra’s’ rebirth at the end? That maniacal laugh? What’s not to love?