My Favourite Outfits In Legally Blonde

Legally Blonde is one my favourite movies of all time. Unpopular opinion, I know. But in all honesty, the film has resonated with me in a way that many films simply have not. It doesn’t really try to be anything more than it really is. It doesn’t try to be serious or overly intellectual. Instead, it is fun, feminine, and heartfelt.

At its core the film is a celebration of femininity. Elle’s femininity, though often mocked by her peers, is really integral to her character development, and the development of the people around her. Through her kindness, she connects with her adversaries, turning them into friends instead. It is not only Elle’s ambition and intellect that help her reach the top of her class, but also her genuine excitement and interest in the law. At the climax of the film, it’s Elle’s knowledge of salon hair treatments that win her the case.

Fittingly, the themes of Legally Blonde are reinforced through fashion, a medium that is seen as traditionally feminine. Elle’s fabulous outfits aren’t there just for vanity’s sake, but they play an integral role in helping propel the story forward. With that being said, I want to talk about a few of my favourite outfits in Legally Blonde and their significance.

This outfit is utterly iconic, inspiring Halloween costumes for years to come. But beyond the outfit’s sheer sexiness, this scene is the most heart-wrenching scene in the film. To give some context, Vivian (Elle’s ex-boyfriend’s fiance) invites Elle to a party, telling her that its a costume party. In reality, Vivian’s party is *not* a costume party, Vivian tells her that for the express purpose of humiliating her.

On the other hand, Elle is extremely excited for the party, assuming that she’s been finally accepted by her peers at Harvard Law. And so, she goes all out. For Elle, a costume party is a chance to express herself through clothing, without reservation. When Elle shows up at that party dressed as a pink bunny, she’s at her most raw. She’s vulnerable. She put a lot of thought and effort into the outfit (as demonstrated by the very cute matching choke and bag). And then, turns out, she’s the only one wearing a costume. She’s utterly humiliated.

Elle hears the message Vivian has for her loud and clear: “You do not belong here.” In short, this costume is more than just an excuse to put Reese Witherspoon in something hot. Rather, her costuming reinforces the story the film is trying to tell, that Elle, as herself, is not welcome at Harvard Law. 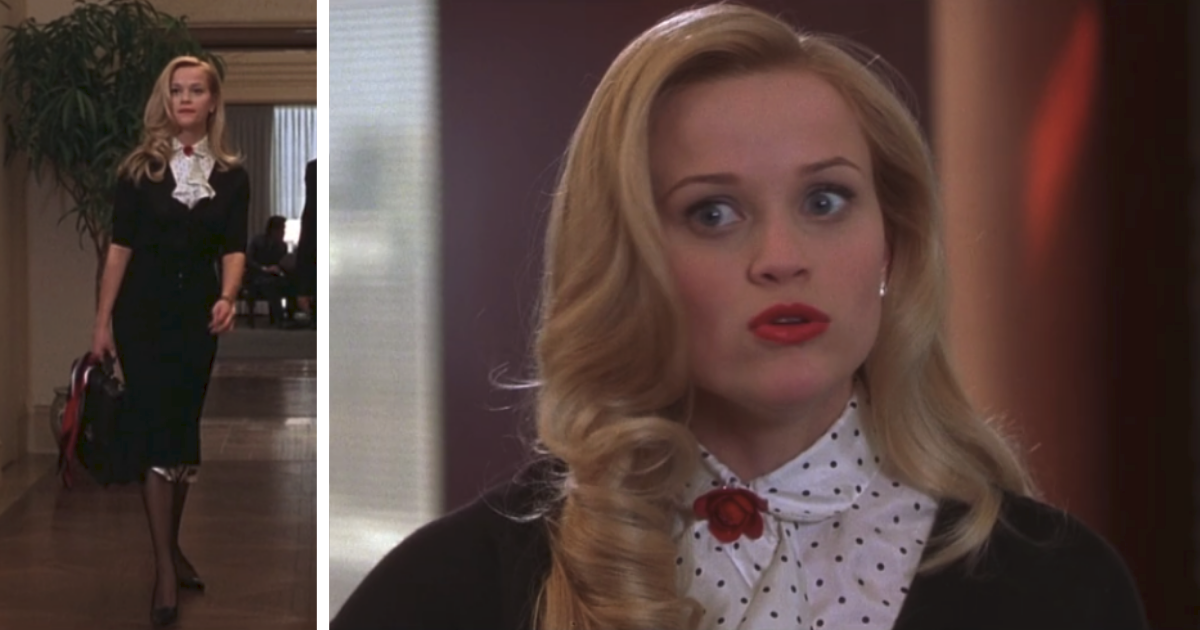 I love this outfit! It is so cute and classy. But, despite my personal love for this entire look. This look isn’t Elle. It lacks her usual whimsy and love of bright colour, which is exactly the point! Elle wears this outfit to her first day at Professor Callahan’s much coveted internship. This outfit demonstrates how Elle has successfully changed enough of herself to fit into the world of law.

Through out this time, Elle consistently struggles with the fact that she feels like she doesn’t belong at Harvard and at her internship. These feelings are only intensified, after she starts to succeed, some part of her doubts whether she really belongs. This is a subtle idea in the film that isn’t fully explored. Nevertheless, Elle’s styling really conveys this tension. She looks like what a lawyer should look like, yet, we know this isn’t really Elle.

This outfit is beyond stunning. I love the pink all over and her hair looks gorgeous! More importantly, this outfit is the culmination Elle’s growth during the film. This outfit isn’t Elle trying to look like what a lawyer should look like. Rather, it’s Elle as a lawyer! Elle’s choice to don this particular outfit tells us, the audience, that she accepts herself as she is. This is communicated through the costuming. The outfit’s silhouette is very professional and classy, but the head to toe pink is very Elle. Elle doesn’t have to pick between being kind and girly or being ambitious and intelligent. Elle is all of those things and she refuses to put herself in a box and her outfit shows us that.

I particularly love how it is Elle’s compassion for Brooke that makes Brooke trust her enough to give her valuable information. More importantly, she doesn’t betray Brooke by telling others the information she’s learned. In the courtroom, Elle’s smarts shine. It’s well established throughout the film that she’s quite the deductive thinker. Her sharp analytical skill in conjunction with her knowledge of salon hair treatments wins the case! Elle’s femininity isn’t a hindrance like many have assumed, rather it is an asset!

In conclusion, not only are Elle’s costumes an excuse to put her in some stunning outfits, but they are an integral element to the story the film tries to tell. The film mirrors it message by showing us the value of feminine coded things like costuming and fashion. The costume is not simply a vapid exercise, rather there is a great deal of thought put into these choices. Above all, I love how the film shows us that people are more than the boxes we put them in, and fashion, is an extremely effective way of defying the boxes others put us in.