Turning Up the Heat with Cooking Manga

When you think of food in anime and manga, there’s no doubt that some examples stand out. From the picture-perfect food of Studio Ghibli that makes even the simplest of meals look like Michelin Star entries:

To the apparent orgasm-inducing food of Shokugeki no Souma:

No. No, no, no, no. Shokugeki has spoiled the image of food in anime for viewers. And Ghibli food is amazing, bless their heart, but food is obviously not the center of their films’ attention. No. Today I’ll be telling you all about the wonderful world (read: genre) of food in anime. These manga tell stories! They tell tales of food so delectably delicious, of chefs who struggle so hard to achieve their dreams and their burning passion of just—cooking! There’s going to be two uniquely separate categories of food in manga that I’m going to be touching on. So without further ado, let’s get into it!

Food being the medium of growth

Here, I’ll talk about manga where the protagonists’ character journeys are fueled by food/cooking.

Sota’s Knife is a heartwarming tale about Sota, a steadfast cooking apprentice working in a traditional Japanese restaurant. The manga details his time working as a kitchen hand, learning the intricacies of cooking traditional Japanese cuisine, and forming relationships with the other employees. Watch as he makes his way up from peeling daikon to working the grill and share in his troubles and tribulations.

Hell’s Kitchen (no, not the Gordon Ramsay one)

God, I fucking love this manga. Typical high school setting. Typical high school boy Satoru who’s disinterested in most things, no set goal in life, all around average at everything he tries his hand at. Unassuming, vanilla, boring. The atypical? A chance meeting with the demon Dogma, the Earl of Poor Eating. The cuisine he’s most wanting in this era is the pure soul of a chef. Satoru’s empty vessel intrigues Dogma, who makes it his cause in life (unlife?) to nurture him into a true chef. Watch Satoru grow to love the sheer act of cooking, watch friendships form, bonds break, and watch this once average boy achieve the remarkable.

God! This manga is just *chefs kiss*. Words can’t express what this manga achieves, but that’s what you’re here for, so I’ll give it a go. Bambino chronicles the tale of Ban Shogo, a cocky college student who thinks he has what it takes to become a professional chef. Follow him as he apprentices at one of the most prestigious Italian restaurants in Roppongi, coming face to face with what a real kitchen looks like. Watch as he’s beaten down and built back up over and over again. Romance, angst, heartbreak, giddy triumph, this manga has it all. This manga touches on so many character arcs, so many stories. You feel as if you’ve known these characters your entire life.

Lastly, it’s not just one manga that tops off this category, but rather a mangaka. Shigeru Tsuchiyama, the absolute masterclass himself. Gokudou Meshi (Criminals Meals), Kuishinbou (Gourmet Fighter), and Oogui Koushien (Chowdown Champs). All of these are fantastic, addictive manga that will have you on the edge of your seat.

Gokudou Meshi chronicles a group of inmates having a competition where the winner is decided by the one who narrates the best meal they’ve ever eaten.

Kuishinbou and Oogui Koushien are similar in the sense that they both center around competitive eating. That’s right! Competitions to see who can eat the most dumplings in thirty minutes, or contests to see who can eat fifty hard boiled eggs the fastest! Kuishinbou especially. While Oogui Koushien dwells on the high school side of the competitive eating scene, Kuishinbou takes on a more professional edge, with worldwide championships taking place in separate arcs. It’s a uniquely enthralling tale of it’s own.

And a special mention to Amaama to Inazuma, an anime so wholesomely pure, so mind numbingly sweet, that you can’t help but smile watching it!

Have you ever heard of the ten yolk egg ? Laid only once by the Ten-Feathered Giant Chicken in it’s lifetime:

Ever heard of a cabbage that rots if you don’t cut it into 0.8 millimeter strips? Or perhaps a literal tree of meat? 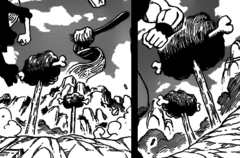 These are just some of the weird and wonderful ingredients you find in Toriko. Admittedly, some of the plainer ones. Wait until they start eating God. Watch the characters eat them raw or watch the chefs literally fight to cook these dangerous ingredients.

Next is Yakitate Japan, and, uh—

Very, very, very wacky. Read at your own risk, because this story about baking bread soon turns into a fight for the domination of the earth:

So come! Read these thrilling stories featuring food and come lament with me over how delicious the food is, how delectable the characters grow, and how wonderful their world is!

Also we can cry about how anime adaptations of these are never going to live up to how great the manga is.