Persona 5: What Works and What Doesn’t (Part 1) 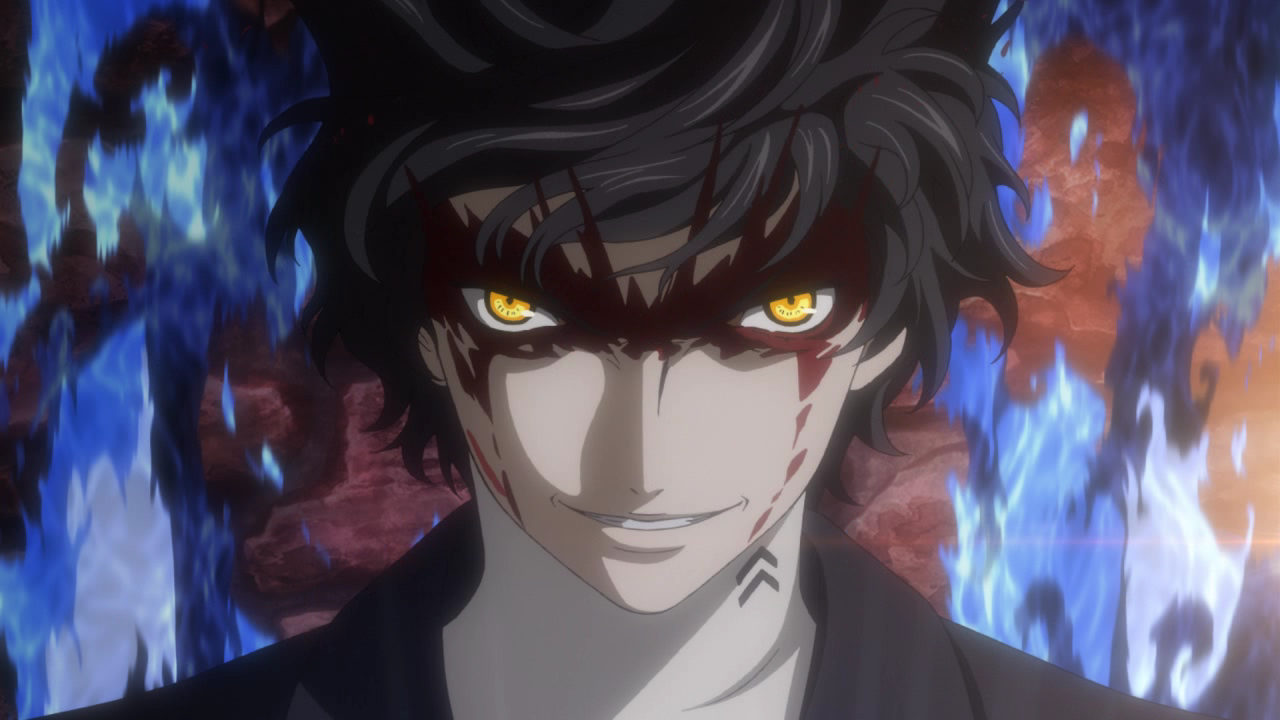 Persona 5 released by Atlus in 2016 for the PS3 (which is the platform I poured over 100+ hours into playing it over this summer) represents both an eclectic mix of both dungeon crawling JRPG, social simulator, and Pokémon. Through a combination of its gameplay, music, visuals, and story, it has earned massive critical, popular, and commercial success.

That’s why it’s a bit of a shame I feel that despite its monolithic, 100+ hour runtime, which encourages replaying to learn its mechanics and explore side stories, that I was only truly engaged for the first 10 hours of its runtime, and increasingly frustrated by its story and associated mechanics. But before explaining where the game’s story falters and disappoints, first we have to take a close look at exactly why I found those 10 hours so exciting and vibrant compared to the rest.

This article, of course, will be going over both this 10 hours in a fair level of detail, but also the broader plot beats of the next few dungeons of the game. It’s not intended to primarily be a review of whether the game is enjoyable on the whole, but rather an overview of where it succeeds and where it fails. Accordingly, anything past this point is fair game for spoilers (though only when necessary for the argument).

Nowhere during this ridiculous runtime does the majority of the package falter: the audiovisual assault is relentless and fun even well after your 50th or 100th hour into the game. In fact, the fantastic UI and All-Out Attack animations, combined with the excellent acid jazz soundtrack, might be my favorite aspect of the game as a holistic experience. Nothing else quite sells the experience of being a phantom thief quite as well.

In fact, it’s only really with the story, in the characters I meet, in the way the arcs are setup, in the side missions and explorations I can do, that I can really take fault. And even then, the game starts off strong in this regard, with a strong central mystery, fun premise, and some cool partners to add to your growing roster of phantom thieves right off the bat. It’s only when the story starts to settle into itself and the dungeons start coming one after another that things begin to stale. 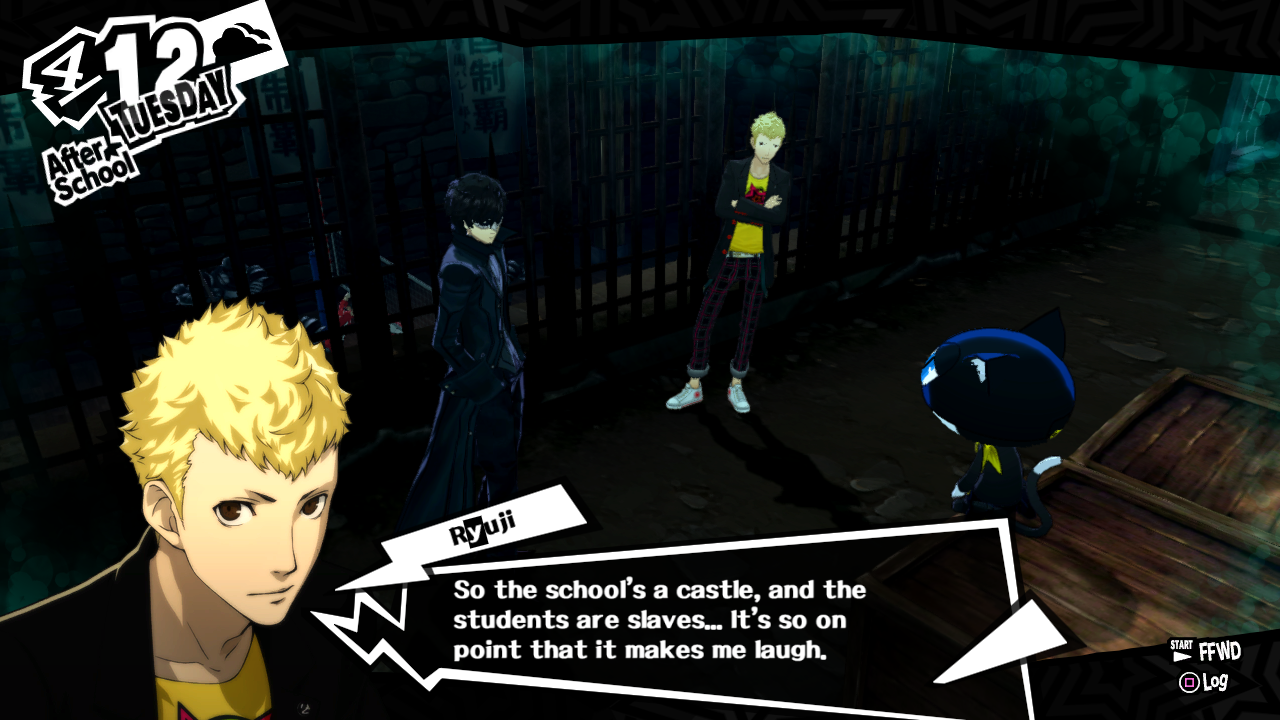 ( Stop trying to deconstruct the story Ryuji, it’s not even an hour in…)

When you boot up Persona 5, you’re thrown into the persona (pardon the pun) of Ren Amamiya (though this name is, as in most JRPGs, only the default and encouraged to be customized). Framed for a crime you didn’t commit, you’ve been sent to room and board in the dusty attic of a small coffee shop in Tokyo, where you’re promptly told by the owner that your only hope of reintegration into society is to keep your head low and ride out your parole for the next year.

Naturally, you’re also almost immediately thrust into a surreal, distorted castle in another world along with fellow rebel against the system, Ryuji, and… a talking cat, Morgana. This puts you on the shitlist of volleyball coach Kamoshida, who acts as the de facto authority around the school. A bit of shenanigans and explanations fed piecemeal to you the player over another hour or two later, and you, Ryuji, Morgana, and another student, Ann, now form a 4-man band dedicated to exposing Kamoshida’s crimes. The catch? You have to steal his treasure from within this castle, which acts as a perversion of the desires of the ruler, using the magical powers known as “Persona”. And thus, with all the explanations and tutorial more or less complete, you’re left to your own devices.

Of course, waging interdimensional psychological warfare (in the form of dungeon crawling JRPG combat) is harder than it looks, with limited supplies of HP and SP (Persona’s equivalent of Mana), so you’re forced to dive back in again and again to hopefully crack the next safe room/checkpoint in order to reach the treasure in time. Of course, all of this is also going on while you’re attending school, so you’ll have to balance out your time concerns between fighting your demons (literally), hitting the books, and grabbing ramen with Ryuji. For those who aren’t inclined to socialize for no reason, the Social Link system rewards you with in-game bonuses for finding new characters and raising your bonds with them (which usually means inviting them to grab Ramen with you). 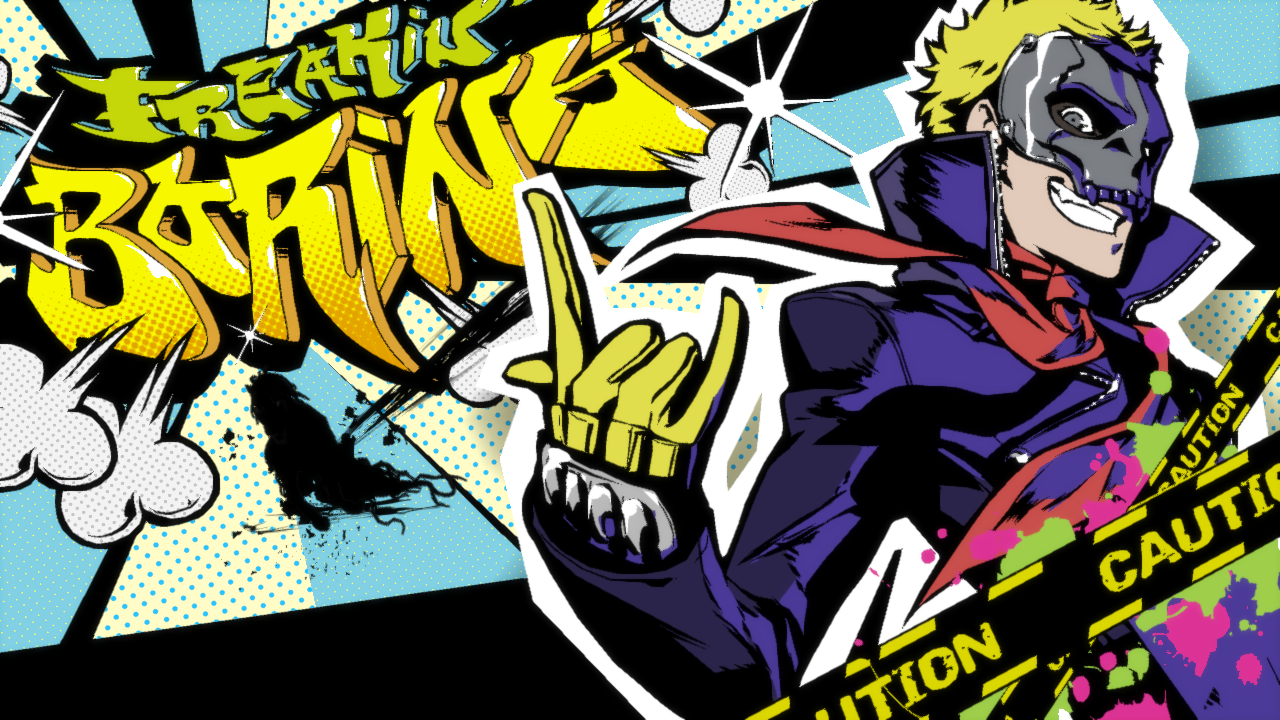 No, you can’t date him, sadly. Yes, Makoto does get a cooler outfit, sadly.

Ryuji, one of the first characters you meet and one of the first to join your party, is probably going to end up being one of your first picks for spending time with. Not only does he not require any stats to start hanging out with, but you’re probably going to have either him or Yusuke as your team’s heavy physical damage dealer for the rest of the game, and those Baton Pass, Follow Up, Harisen Recovery, and Protect are too good to pass up. The fact that both of you can share some camaraderie in the way others judge you by appearances and have been betrayed by society only provides more reason to spend some quality time together.

The actual story side of his social link involves helping him get back into exercise after his old injury at the hands of Kamoshida, dealing with the fallout of the old Track and Field club, and ultimately deciding how to move forwards with his life. It’s a surprisingly touching and reflective story, especially coming from someone who for the most part serves as the comedic relief and slightly idiotic best friend in your group.

Of course, you can also choose to spend time with Ann as well (especially if you’re hoping to take advantage of the game’s romance options, which sadly excludes Ryuji). Her story is also quite good and her perks are also good even if her position on the team isn’t quite as mainstay as Ryuji’s. Unfortunately, she does require level 2 Kindness to talk to, which provides a bit of an early game barrier.

Most importantly, both characters have stories that are directly involved in dealing with the aftermath of Kamoshida’s actions, and both find themselves trying to figure out how to improve themselves and become stronger people (though crucially, your role is mostly one of observer and advice rather than someone meant to solve their problems for them). Both social links work well both on their own right, and exploring their character motivations is fun and easy to go through with few hurdles (beyond Ann’s Kindness requirements) and tie back well into the main story. 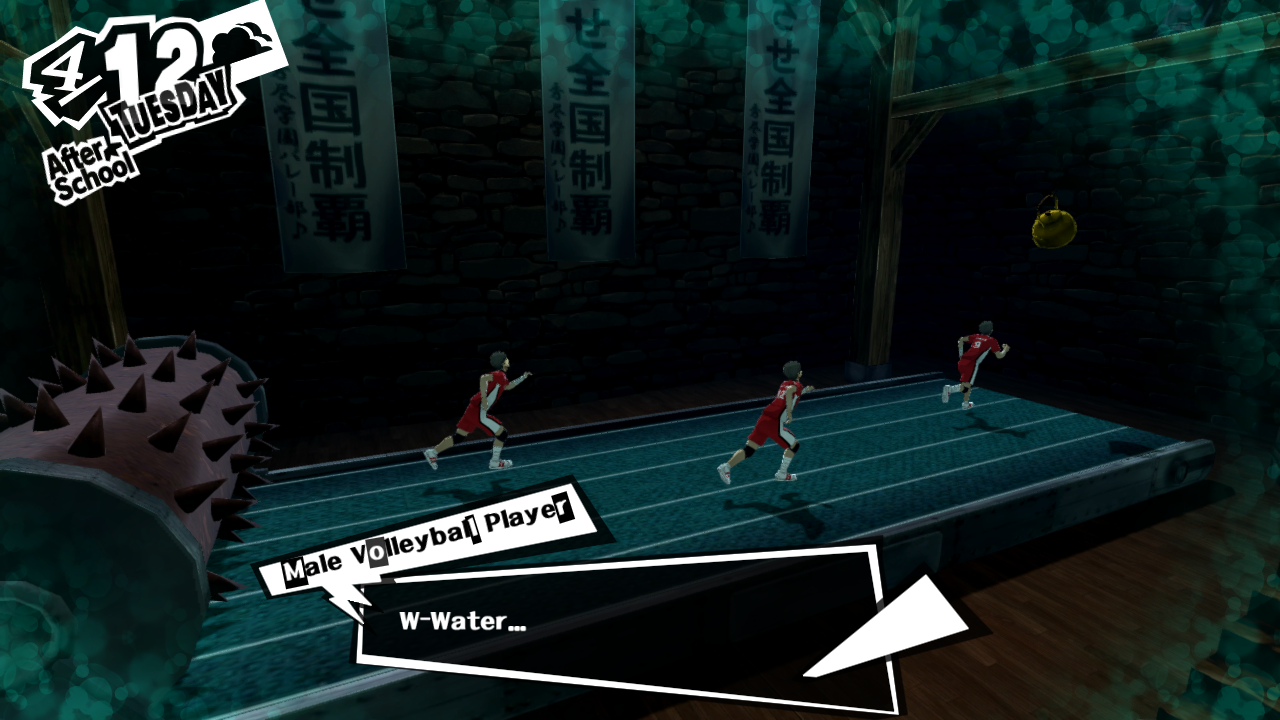 A Villain You Love To Hate

You also have plenty of reason to want to destroy Kamoshida, given that he’s currently trying to get all three of you expelled, is physically abusing the students on his sports clubs (like Mishima, your classmate), and sexually abusing the ones he isn’t physically abusing (like Shiho, Ann’s friend). He’s allowed to get away with these things by both the principal and parents of the students he abuses due to the prestige the school is afforded by having a former Olympian teach. Basically, he’s just kind of an ass to everyone you know or like at this point.

He’ll appear every so often, both inside his psychological castle, and within the actual, physical school to taunt you and remind you why you should hate him. Even when he’s not there, his presence continues to make itself felt among the student body and other teachers if you spend enough time talking to your classmates or standing next to people passing gossip.

Kamoshida works well in all these dimensions—he’s someone all the characters in the story can relate to and find their own reason to despise, but also someone the player can probably find a direct analogue to themselves in their own life, or at least accept that Kamoshida exists as a realistic caricature of people who do exist in real life—so it brings some real amount of satisfaction to see him crumble under the weight of his own crimes. And the game itself does a good job of reminding you of all this, with scenes inside his castle occasionally reminding you of what it is you’re worth fighting for, whether it’s his rampant abuses, misogyny, or the general tension among the school from a student and faculty body cowed into submission. 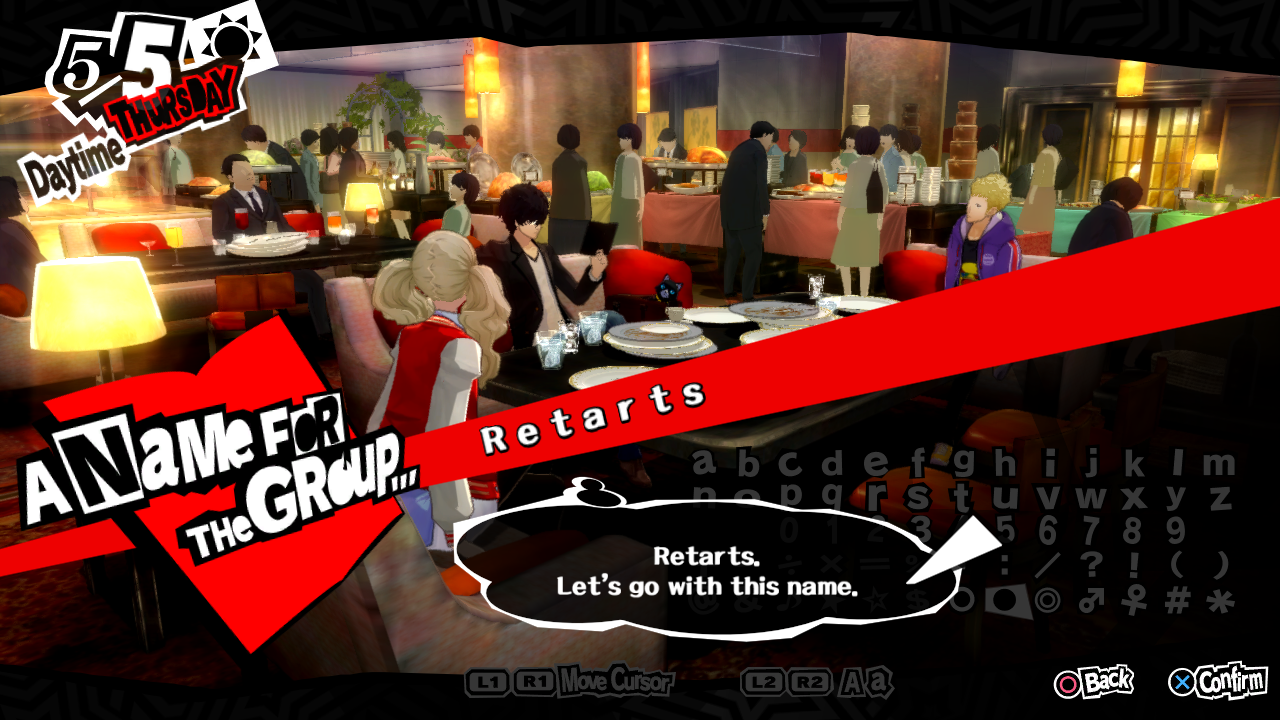 (Please don’t judge me for my terrible naming skills)

And this is all well and good up to this point. You’ve got an attractive audiovisual package and fun gameplay along with some judicious time management mechanics (which might make you question why you’re spending a week of your own, real life time playing a video game, until you remember you’re under quarantine anyways) and some fun characters to learn more about and to commiserate with together with as you work to defeat the biggest asshole you know.

It’s only when you start to play a bit more and dive deeper into the story that the faults that do exist in the game start to make themselves felt. Which is a topic, unfortunately, for the second part of this article.