Heroes don’t end. This single fact perhaps is the greatest feature and the greatest limitation of super hero story-telling. Asking anyone to believe that someone could keep doing what these characters do and keep doing it for as long as they keep doing it is asking quite a bit. There must be a sensible limit to the amount of sheer tragedy, heartbreak, thrill, intrigue, and vengeance that any given person could experience in a lifetime. It’s why the continuities that span these characters lives take decades upon decades of real world time to ferment and develop. Even without a formal and strict reboot event involving imploding universes or time travel, characters that run for long enough, shared among enough writers, will inevitably change.

A fairly recent example would be Nick Spencer’s ongoing run of Spider-Man, taking over from Dan Slott’s somewhat reviled rendition of Peter Parker and returning the character to its previous status quo. Often writers arrive at a book and leave a mark on the character and universe in the hopes of sustaining an ongoing legacy (just consider the sheer number of proposed Robins and Robin-adjacents various Bat-writers have brought to the Bat family). However, it is truly rare that an upstart writer, when given a shot at writing a character, one drafted by industry legends no less, completely upends the status quo and makes his rendition the de facto exemplar for the series going forward. This is precisely what Frank Miller managed with his initial on Daredevil, taking a fairly unremarkable character with a noteworthy gimmick and turning him into Marvel’s answer for the encroaching societal ills that the Distinguished Competitor was already addressing.

Daredevil lives in New York. Actually, allow me to rephrase. Perhaps it would be more accurate to say he tastes it, lives it, breathes it. Seeing the city in all its facets and dimensions, savouring every texture, puzzling over its sea of accents, choking down its roiling stench. Matt Murdock’s enhanced senses allow him to see the city in dimensions that his fellow New York heroes could only dream of. Here is where we see a city altogether different from the one you’d find in the pages of Fantastic Four, Spider-Man, or Iron Fist (at least in the ‘80s). Murdock’s New York is an entire city crammed into a rat hole, hiding everything, betraying nothing – a cold, cruel place. A city built on (and by) dirt and grime. It’s a vicious place draped in the tragedy of humanity.

Indeed, Matt Murdock is the perfect hero for the city that only he is most privy to. A sinner and a saint, Matt is at times a shining savior the city needs, proud, iridescent, and defiant. At his worst, however, he is little more than a beast. Murdock is Miller’s ultimate thesis on Freud’s eternal conflict between the ego and the id, the divine and the human. Here is a man submerged in vice, constantly striving for the light. Idealism trapped in the prison of flesh. Murdock is subject to constant conflict between the spirit and the body, his blindingly scintillating ideals against the stark, unforgiving reality of things. As such, the greatest Daredevil stories are the ones that explore this dichotomy, highlighting this split, and driving Matt to his lowest point so we can once more see him return to us as we know and love him: assured and proud, with that trademark defiant grin. A man who earns his salvation, no matter how many times his wings are clipped. A man without fear.

It is here that Mark Waid’s seminal Daredevil runs excel, showing us a Murdock who has  had his world utterly and absolutely upended try to get better. The breezy pace of the Waid issues come as a bit of a shock after the screaming fever pitch that characterised the Bendis and Brubaker stories. Nonetheless, it was exactly what the character needed after almost a decade of major stories seeking to uproot the man and his city. What was needed was a return to form – something familiar to remind us where we came from and give us hope for where we’re going.

The Waid runs, illustrated first by Paulo Manuel Rivera and then Chris Samnee, infuse Daredevil’s world with an explosion of colour. It was a look that was absolutely brazen and unbelievably bold just coming off of a much lauded run drenched in cross-hatches, murky browns, and asphalt grey. This was something highly reminiscent of Daredevil’s Silver Age years, when he was just another C-list happy-go-lucky, devil-may-care crime fighter. It was likely the most stable era of Murdock’s life. Waid’s tone suggests a return to these halcyon days for Matt. Issue #1 features Matt swashbuckling into a mafia wedding, beating a bunch of bad guys, kissing the bride and posing for a front page photo. It’s positively idyllic, almost juvenile, a fantastic realisation of the power fantasy Daredevil can embody when he’s at the top of the world. Still, all this pomp and bravado does feel a bit surreal coming off of arc after arc consisting of Matt’s world being shattered and his heart stripped bare. The way Matt presents himself is deliberate in a way that suggests a degree of artifice. Indeed, every part of the run feels like an act of subversion.

There’s a sleight of hand going on here. Waid, Rivera, Samnee, and even Matt himself are trying to pull the wool over your eyes. The colour palette, the humour and panache, the camp Golden Age action – all of it an attempt to hide mental and spiritual bruises that Matt can no longer run from. The presence and acknowledgement of these coping mechanisms is to acknowledge the trauma itself, it is to say that the slate has not been wiped clean and will not be for some time. Matt does not get to run from this in the shuffle of writers and artists. These scars are his to bear. The result is a remarkably seamless narrative spanning almost a decade of Daredevil stories, beginning with Kevin Smith and Joe Quesada’s Guardian Devil, continuing in the Underboss saga, and culminating in Waid’s seminal reconstruction of the character and re-framing of the mythos.

Mainstream super heroes are trapped in a hellish cycle involving near continuous heartbreak and tragedy, all building up to nothing. A rising crescendo followed not a by any kind of meaningful fulfilment but, more often than not, a wiping of the slate so the whole sordid affair can be repeated. What does an editorial team do once it has been decided that a given universe and its characters have been through too much? It’s discarded and a facsimile is sought after so we fans can bang our action figures together some more; pop a few more heads off our Barbie dolls. We do it all over again until we get our hands on some newer, shinier toys.

For all the stellar storytelling superhero stories are capable of, it is a medium utterly without reverence or respect for itself or the integrity of its stories. They are absolutely without consequence. A life of unending, cyclical torment where nothing ever really happens, where things never really change – it’s maddening. Still, Murdock bears it all, and, somehow, by divine providence or sheer masochism, gets back up to face it all again and again, glowing and grinning like there’s nothing in the world he’d rather be doing than dangling inches away from damnation. The man without fear. The man fighting for his salvation. Sculpted, out of the sickly, transient human heart. 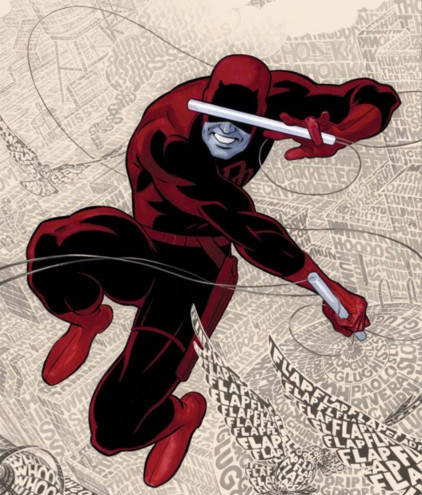