In a recent podcast hosted on our YouTube channel, me and the former president of the Vault Publication, Andrew, sat down for a theoretical discussion on media and democracy (link provided above). While we touched on a plethora of of topics including the FOX news transformation, the philosophy of democracy, and audience perspectives, one particular focus of our conversation was the role which new media, specifically social media, played in our post-modern democratic society. As a response to the conversation, I decided to write this little piece on my particular views on the subject, including some of the many things that I learned during my talk with Andrew. 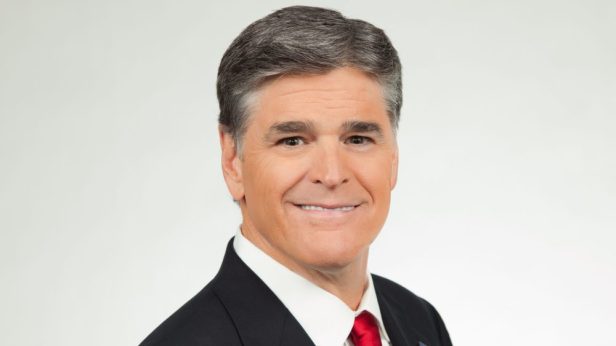 Yes, we even talked about this beautiful hunk of a man.

To begin, perhaps the most important aspect of the social media in the political sphere is the ability of audiences to themselves become producers of content; ‘prosumers’ as communications scholars have aptly termed us. According to scholar Nathan Richardson, this fact has led to a technological space which is highly participatory, reflexive, and difficult to regulate. Through this merging of producers and consumers into one entity, social media allows for an unfiltered explosion of opinions and ideas. On Facebook alone, over 500,000 comments are posted every sixty seconds. While the possibilities for this volume and ease of communication are exciting, there are some dangerous trends which accompany it. Case in point, it has become increasingly difficult to regulate misinformation and deceptions on these platforms, as every piece of content is given a relatively equal space to operate within, in addition to a lack of repercussions for dishonest posters.

Unfortunately, this has led to massive, largely undemocratic, consequences in the offline world. For example, as a result of an understaffed Facebook moderation team in Myanmar, misinformation and hate speech which eventually led to genocide rapidly spread throughout the cyber sphere. This disorientation of our perception of truth can be attributed to what media scholar Marshall McLuhan calls ‘autoamputation’, where we are numbed to media’s underlying structural effects, like the structural authority which apps like Facebook hold over our conceptions of reality. An interesting way of looking at this particular conundrum comes from 20th century cultural critic Georges Duhamel, who famously said “I can no longer think what I want to think. My thoughts have been replaced by moving images”.  This quote, although originally aimed at film, strikes at a property which makes new media dangerous for democracies. The endless change which social media feeds us gives little room for critical analysis. As a result, our participation in democracy is constantly at risk of being confused by misinformed conceptions of reality.

The disorienting quality of social media may also have effects on our structural understanding of democracy. According to professor of journalism Michale Schudson, “whether media will make democracy easier or harder to practice depends on… [the] democracy we have in mind”.  Representative democracy, wherein the people elect parties to make decisions rather than voting on policy itself, is the main structure by which Canadians organize their politics. However, social media stands in opposition to this type of governance. This is largely because it promotes ‘sound-bite politics’; politicians are forced to forgo the nuance of their positions in favour of easily digestible ideas which can fit in a Twitter post, for example. This can lead to what philosopher Gordan Graham calls an ‘opinion poll democracy,’ where it is not so much the substance or veracity of the position which matters, but the way it is presented. The question is, do we want a representative democracy, or are we open to thinking about different ways of governing ourselves? Is the old way of constituting and formulating a democratic government simply obsolete, or must we shift the direction of social media technologies to better satisfy our political needs?

Of course, this line of questioning opens up a whole discussion on the role of technology, importance of politics etc. Needless to say, however, whatever path we choose is fraught with peril. This alternative populist approach to democracy, for example, can be extremely dangerous. Famous philosopher and critical media scholar Walter Benjamin notes that we can look even at our own destruction with aesthetic pleasure through media manipulation: “this is the situation of politics, which fascism is rendering aesthetic”. To Benjamin, the root of fascism is its ability aestheticize politics, turning democracy into a spectacle to mindlessly observe rather than actively take part in. Similarly, social media transforms the visibility of power by making politicians into public figures. This, combined with the notion that social media disorients us from facts, has resulted in a shift towards a system where the spectacle of politics matters more than actual policy. In this sense, the politician is no longer responsible for doing a good job, but generating a devoted following. The challenges of this approach are evident. A government which renders politicians, and by extension politics, aesthetic is not really a democracy, but a sham of a process, a sport to entertain rather than a responsibility to upkeep. 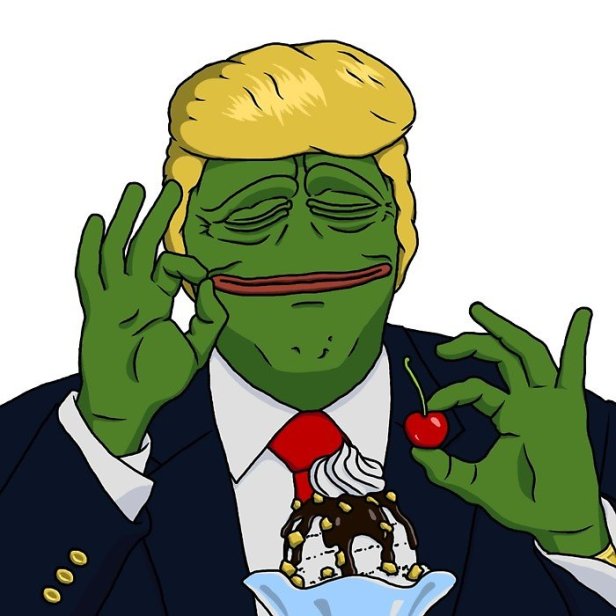 Images of the God Emperor, Trump himself, come to mind when talking about aesthetic politics.

The economic structure of social media is also a cause for concern. Contrary to how many of us would like to believe, social media does not exist in a socio-economic vacuum. Rather, it interacts with financial elites, many of whom have a stake in our politics. Considering this, Marxists Noam Chomsky and Edward Herman developed a set of five filters which critiqued the ways in which news media are coerced by dominant ideology. While some of these filters do not apply to social media directly, such platforms still carry over an internal logic of capital, so many filters remain relevant. A contemporary example which demonstrates the power of capital to politically effect social media platforms was the infamous YouTube adpocalypse in 2017. During the crisis, powerful companies like Coca Cola and Amazon united to boycott the platform in an effort to change YouTube’s monetization system. This case study gave a fine example of Chomsky’s second and fourth filters, advertising and flak respectively. According to Herman and Chomsky, the movement towards advertisement in news media results in an emphasis on content which does not disrupt the audience’s ‘buying mood’. As advertisers gain power over media by controlling revenue streams, they can begin to exert pressure on media outlets to coerce social media into politically aligning with them.

Granted, the problems they wished to address, mostly concerns of hate speech and terrorist propaganda, were arguably valid. Nevertheless, the connection between the power of capital and social media is palpable. Today, the new YouTube algorithm is designed specifically to avoid “controversial” content, notably videos devoted to LGBTQ issues and firearms. The result of this infringement has been the suppression of user content and an Adornian illusion of choice which limits the real scope of options that consumers have. As with any democratic project, freedom of choice is a pivotal factor. And, for this idea to be realized, the freedom of information is key to making such an informed decision. Considering this, the logic of capital which pervades social media can recognizably hinder attempts to move towards democracy on platforms like YouTube.

Perhaps the most widespread argument employed by people in support of a democratic social media is the notion that it has created a new ‘cybersphere’ where ideas can be debated or brought to light during the decision making process. This idea has more or less been an extension of the notion of the ‘public sphere,’ a place where the public can have open conversations on politics and policy,  invented by theorist Jurgen Habermas. As legal scholar Lawrence Lessig puts it, ‘Cyberspace is that area where individuals are, inherently, free from the real space of sovereigns”. One of the liberating aspects of social media is that it allows people to communicate freely; to become aware of their oppression and effectively organize counter-authoritarian action. Moreover, those who have access to internet have the resources necessary to become better trained to participate in democracy. Examples like the Arab Spring revolution in 2011 or Iran’s elections in 2008, where Facebook and Twitter were effective in uniting activists against government oppression provide good evidence for this. 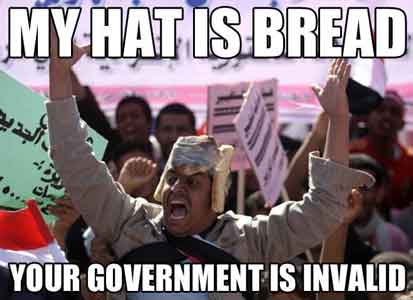 Both the Arab youth, and the meme community had a blast subverting middle eastern governments.

Nonetheless, while these arguments seem to highlight an underlying democratic tendency within new media, what they really display is the capability of unregulated social media to subvert power domains. Without the proper infrastructure to create a democratic environment, social media can do little but provide a space for critique of authoritarian power. In most cases social media gives the groups who take advantage of it immediate revolutionary success, followed by a largely undemocratic failure. Perhaps the greatest evidence to this is the fact that movements like the Arab Spring, despite the wide success of social media, have yielded largely counter-revolutionary results. Even Habermas, who originally introduced the notion of the public sphere, suggested that the original system died due to the infringement of capital and government influence on the pure culture debate of bourgeois society. Within the cyber sphere, these concerns are equally pertinent.

Even to say that social media is intrinsically ‘subversive’ can be considered problematic. The cyber sphere, writes Lawrence Lessig, “is not a world where freedom is ensured”. Largely, cases where social media have successfully subverted authoritarian powers have been in contexts wherein internet structures were developing parallel to an authoritarian state which was too weak to control the web’s torrentuous ebb and flow. On the contrary, social media have in many cases been successfully regulated by authoritarian states to serve the purpose of the government. For example, Chinese apps like WeChat have been used for surveillance by the communist regime, even on Canadian university campuses. The Cuban government has also recently adopted social media (including Twitter!) in an effort to modernize, suggesting that these platforms are neither positively democratic nor totally subversive in nature. With these points in mind, it becomes clear that the ‘cyber sphere’ imagined by proponents arguing for a pro-democratic social media is in reality much less robust.

In this article, I’ve given a small peek into my insight surrounding the notion that social media is an intrinsically democratic regime. Ultimately, in my opinion, the property of new media is not to democratize, but to subvert, disorient, and distract. New media, while useful, can never operate on its own in creating a more democratic society, and indeed in many cases it has led to less democratic outcomes. Considering this, policy makers and users alike would do well to understand that they have to take responsibility for social media’s outcome on society. In the end, it falls upon us to make ourselves more democratic, not on the infrastructures which we use to communicate.