Persona has become a gaudy, misshapen, sickly travesty that will stand forever as a blight on my soul and a specter in my dreams. It says quite a bit that after the series’ demise 10 years ago with Persona 4, I still find the irresistible urge to awaken the weak, blind, deaf, and dumb who worship this pitiable husk of a series from their trance. It has so far been a meandering and meaningless exercise. But, like Sisyphus and Atlas, I revel in my penance for it is only in the most grueling and soul-shredding work that one can find any real meaning. So I wait for my time. I wait for the autists and weeaboos to come. And they will come, as they did for Jesus of Nazareth, Jeanne d’Arc, and Socrates, for it is always those who speak truth and shine a light on the prejudices and misshapen fantasies festering within the addle-pated and blighted ignoramuses that are the first to be felled by the forces of deception and villainy. It would be no overstatement to say that my sacrifice is ultimately and absolutely messianic. So it is that I reach out to the truth. 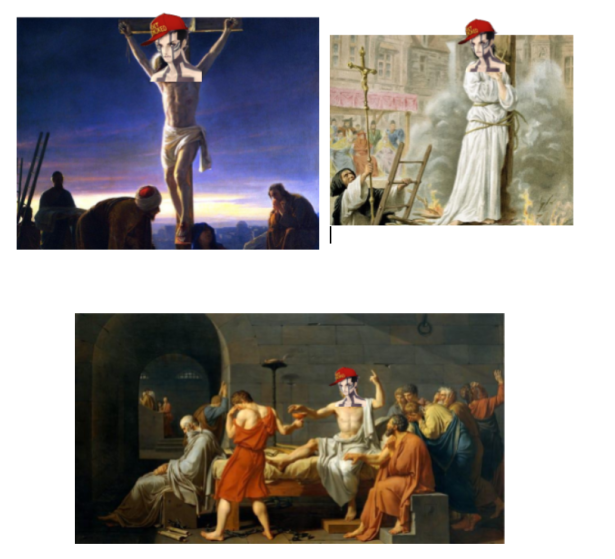 Persona 4, at the surface, is concerned with truth (the protagonist and his cabal of idiots are trying to solve a serial murder case gripping their sleepy town of Inaba), however, the game’s real love is community. For all of my gripes with P4, Inaba is a fully realized setting and it is difficult to not feel some affection for the housewives giving you advice on shopping, kindly neighbours offering their produce, or an old man who tries to guard his town against the encroaching strangeness. Inaba is a delightful setting with a comforting ambiance. However, P4 fails to characterize it as anything more. Inaba is a bit too idyllic, a bit too comfy. Something has to give, but it never does. There is no shortage of people with problems in P4 but those problems are treated so blithely that one wonders why they’re even there at all. Take, for instance, Naoto, the only actual detective of the group, and her deep-seated feelings

of inadequacy spurred by her position as a woman in a largely male-dominated profession. Her neurosis is so great she takes to playing a man just so she’d be taken seriously and be respected as capable. How does one overcome this? P4’s answer is all too convenient: beat up the part of her that manifests all these negative emotions – her “Shadow”- and allow her to accept it as a part of herself. That’s how it goes for every party member. These people, each with wildly different problems and neuroses, each follow the same steps to reach a resolution to their turmoil. It’s a formulaic approach to what is meant to be human and genuine. Instead of feeling authentic, these characters and their plight 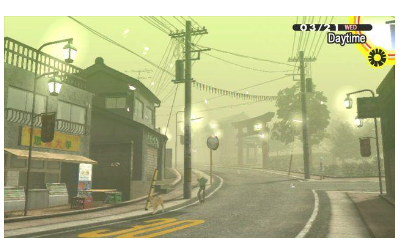 s seem crudely constructed and saccharine because we know how it will all end, that there is a one-size-fits-all solution to dealing with these problems – a hearty blend of “believe in yourself” and “no one is ever alone”. While promising, P4’s approach to its themes has a self awareness equivalent to the framed platitudes you’d see in the houses of 40 year old cat ladies or the kind of subhuman vermin that dribble things like “Think positive!” or “Live, Laugh, Love”. It makes my skin crawl.

Despite trying to tackle some fairly sophisticated themes, P4’s understanding of these issues and the people who face them is remarkably juvenile. That, however, is not to say that the writing staff at P-team are incapable of addressing these issues with a sense of integrity and self-awareness. Persona 3 stands as a testament to P-team’s ability to write a story and characters that revolve around a central thematic axis. These themes, be they identity, rumours, truth, or rebellion, are more or less universal. Persona 3 is keen to avoid banality. There are as many sides to

death as there are people. For a child, it means the end to the halcyon days of carefree youth where one is entirely sheltered from the messy quagmires of interpersonal and familial conflict. For a disillusioned lush of a monk, it is the conclusion that decides the worth of one’s life. Wildly different people in wildly different circumstances will each view these themes through a prism all their own, forged from individual worldviews and experiences.

Persona 3 excels in this kind of intensely personal writing, which is astonishing considering the fact that each of Katsura Hashino’s modern Persona games serve as moral fables on one of three core themes. Persona 3 gets arguably the least interesting and most facile of these: Death. The end of all things, death is nonetheless also a giver of life and new possibilities. Persona 3 serves these functions admirably, dragging Persona out of obscurity and revitalizing Atlus and Megami Tensei. Each of Persona 3’s numerous character deaths demonstrates the dual function of death: Chidori gives her life for Junpei’s, so that he can be something more than a juvenile with a persecution complex, but the sum total of the two lovers, something altogether greater and nobler, and the Hero gives his life for the world he’s grown to love over the course of the year and the people in it. Death is nothing to fear for the true end isn’t physical at all. True death is the vice of sloth and apathy, what needs to be feared is stillness born of fear, the fear of change and something new, vibrant, and terrifying.

Stillness is the true name of death. 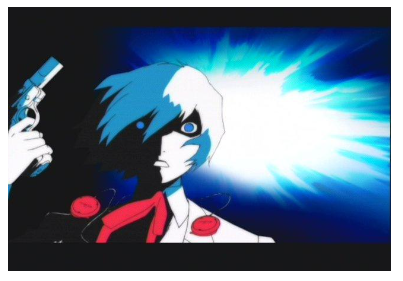 This realization is Persona 3’s crowning achievement. We each find ourselves at various points in our lives where we cannot escape to the comfort of nostalgia, nor do we have a burning passion for the future. We exist in an eternal present, rooted in a perpetual, corrosive struggle without avail or objective. That is stillness and that is the true face of death. To escape, the old must give way to the new. Death needs to herald a rebirth if we are to truly be free. In this sense, Persona 3 is hardly the nihilistic exercise in misery that it is often accused of being. Our heroes experience trauma after trauma over the course of the story’s events: their sense of place in the world challenged, their hearts and minds shattered, so that they may come out the other end better, fuller people. It is this honesty about strife and pain that makes Persona 3 a remarkably sincere game, and leagues more human than what would come after. Pain is a necessary price for the birth of anything with real beauty and substance. Shinjiro’s sacrifice gives Ken a second shot at life and redemption, gives Akihiko some much needed perspective on his myopic sense of guilt. Our protagonist’s death is the final key to the world’s salvation and the catalyst for the full emergence of Aegis’ humanity.  By the end of Persona 3, Aegis has given herself a new purpose, to protect the protagonist. His death robs her of her first autonomous desire and she loses the recently earned meaning her life needed. Here the final chapter of the game’s humanist fable takes place, as Aegis stumbles and struggles for meaning and purpose in that same eternal present every person must endure.

It’s far from subtle, and more than a little derivative, but Persona 3 felt genuine in a way the series has failed to achieve since. It displayed a commitment to the full exploration of its themes with an honesty and straight-forwardness that was eschewed by its sequels in favor of coddling and patronizing its teenage audience. Persona 5 in particular is guilty of this, and I cannot help but wonder if the game isn’t fueled by some kind of shallow opportunism seeking to exploit the heightened political aggression seen globally as yet another generation of young people decide that maybe the foundations of the society they live in aren’t worth much after all. Of course, Persona 5 is nowhere near this radical, as that would require a degree of courage and integrity. Instead Persona 5 hones in quite astutely on the worst parts of modern political activism. Our heroes are a group of outcast youth calling themselves the Phantom Thieves who vow to enact “social reform” by stealing the hearts (read: brainwashing) crooked adults. The world is a 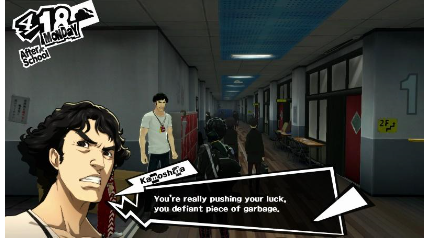 distorted mess of corruption, oppression, spite and apathy, the game posits. So in pursuit of some “social reform” that the Thieves never happen to elaborate on, the group targets notable corrupt adults and forces them to atone for their crimes by brainwashing them into having a conscience, effectively changing who they are completely. From unrepentant sinner to heavy-hearted saint. Our heroes defeat their enemies by toying with their psyches and reconstructing them in a m

anner they find suitable. Make no mistake, the targets in question are vile scum, especially the first, Suguru Kamoshida, whose exploits will ring all too familiar. However, the game’s utter refusal to seriously entertain the notion that the Phantom Thieves may be every bit as distorted and selfish as the people they target shows how much P-Team really cared about doing anything but empowering an audience that wanted any excuse to feel justified for their anger at the world. Fairly basic questions of ethics are completely ignored and, if brought up by a character, summarily dismissed because – would you believe it? – the person to bring up those concerns was evil themselves! So it is that the game presents a very stark, binary morality  which paints our heroes in their dubious exploits as unwaveringly just and without fault, while the villains are inhuman scum who revel in evil for the sake of it. There’s no way to get around how Persona 5 infantilizes its audience by throwing all moral relativism out the window in the one game that sorely needs it.

Persona 3 gives no easy answers. That’s the gist of it and why it’s why it stands so much taller than what would come after. There’s much to say about Tadashi Satomi’s games as well (Persona, Persona 2: Innocent Sin, and Persona 2: Eternal Punishment), with his final two games for the series representing a narrative benchmark that the series has yet to reach since – and likely never will if P-Studio’s current track record is any indication. Satomi’s games are an entirely different beast than Hashino’s and altogether more substantial and rich in their theming and narrative. As such they truly deserve to be discussed separately from Hashino’s works. Persona and Persona 2: Innocent Sin/Eternal Punishment land closer to the stark surrealism of Kouhei Kadano’s Boogiepop series, while Hashino seems to be after mainstream acceptance – more “pop” than “boogie”. That doesn’t seem to have always been the case, however. Persona 3 was developed by a team mostly free of the men who had defined Megami Tensei’s legacy up to that point – men like Kazuma Kaneko, Cozy Okada, and Tadashi Satomi. It was a bold project with revolutionary ideas on narrative structure, seeking to break away everything from Megami Tensei had been up to that point. Whatever it was that drove Hashino and company to do this, it’s gone now. Persona remains a lifeless imitation of the excited fervor that embodied its third entry. To put it another way, it is completely and utterly still, enacting a practiced mimicry of what once gave the series life.