Written and illustrated by Jesaya Tunggal

“Almost there….” said Sirius, slowly tightening a small screw on the metal leg in his hand. With a tiny, well practiced motion, he released the little cog, setting it in its place. He leaned back to admire the precision of his work, lifting the magnifying lense from his glasses and giving a sigh of satisfaction. With an uncharacteristically gentle touch, the man pushed the leg up against the table, testing the joints and moveable parts to see if there were any inconsistencies.

“That outta do her fer now,” he said, tapping his little screwdriver onto the metal surface. 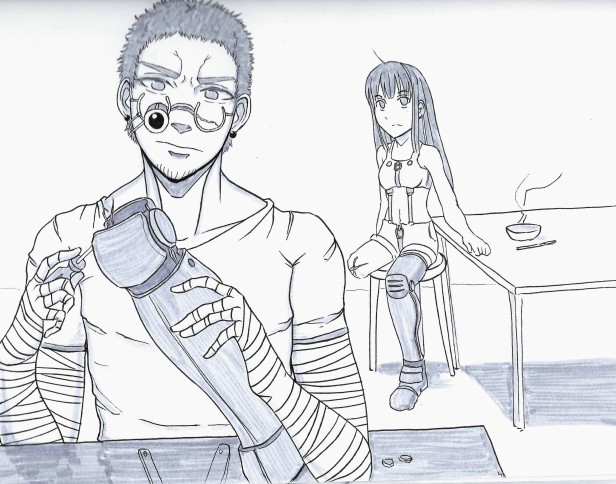 After the commotion of that afternoon, old man Sirius’ magesmith shop had once again settled down. No customers came for the rest of the day, leaving him and Mio alone. That suited the old man just fine. After all, it was a Friday afternoon and that meant he could focus on the girl’s weekly leg maintenance, rather than Mr.Kench’s little crisis. Despite this, a certain tension remained in the air.

Having made the satisfactory adjustments, Sirius turned his attention to the young girl sitting behind him at the dining table.

“Ain’t nothing outta place, nothing missing. Just had ta grease a part or two and it was good as new.”

Sirius took a knee beside the wooden stool where Mio was sitting, only one of her mechanical legs installed. He winced for a moment looking at the scars covering the girl’s exposed knee-stump, but quickly concealed the look.

“Ain’t nothin’,” he mumbled, concentrating on the task at hand.

Mio watched intently as Sirius made the magical seals necessary to reinstating her control over the mechanical limb.

Mio paused a moment, as if tiptoeing into her question.

“Where did you learn to do all of this? All this magic?”

Sirius stopped what he was doing to turn his eyes up towards Mios’.

“Ye’ve asked me that many times before, child, and not once have I humoured you with an answer, now have I?”

Mio halted her querying for a moment, as if considering how to best approach her next words.

“Uncle, that man out front, that man was with the gangs, wasn’t he? What did he want?”

The hair on the back of Sirius’ neck bristled. For a moment, Mio caught a flair of emotion at the back of her uncle’s eyes. But, she could not identify it. Was it anger? Sadness? Fear? Perhaps it was too brief to detect. In any case, it was soon absorbed into the stern, resolutely indifferent pool which she had come to recognize.

“That man, along with his damn kin, belong to a past I’d best forget, leave behind.”

“You worked for the slavers?”

“I couldn’t stomach working for those bastards… couldn’t stand ta see another man suffer. I’ve seen too much of the blood, the carnage, the ruined lives that the whole slave sham has brought…”

He paused a moment, realizing that his words hit close to home, and looked away as if trying to ignore the elephant in the room. Mio looked down at her mechanical legs, rubbing their metal sheen with one of her fingers.

It was a moment before the quiet was alleviated.

Mio took a moment to test the newly maintained leg, wiggling her metal ankles and bending the knee joint back and forth. She looked up at her uncle, a smile almost taking form at the edges of her mouth. Sirius frowned.

Mio wore an inquisitive look on her face.

“What do you mean? The shop hasn’t had any customers today. I checked the ledgers.”

“Well, first I gotta water the ol’ goddess’ shrine. But then… then I s’pose I’ll get to workin’ on the man’s order…”

There was another uncomfortable silence, but this time Sirius felt a weight of responsibility and the guilt of hypocrisy on his shoulders.

“You’re… going to work for the slavers?”

The old man turned his back to the girl with the iron legs.