For the past decade, the FPS genre has been a hotbed of a constantly evolving style of gaming. While FPS’ themselves have been around since the late 80s, the modern FPS arguably came to maturity with the ‘thrust’ for improved graphics.  It was around the release of the Call of Duty 4: Modern Warfare that a focus on graphics took the video game industry by a storm. Sure, games like Crysis had boasted impressive graphical models. Of course, there were a few titles that had technology up to par with Activision. What separated COD from previous works however was its easy accessibility and the fact that it could run on every platform when released, enrapturing the gaming scene with a new aesthetic standard. Every game from then on put graphics as the priority, regardless of its genre. Every iteration of any popular FPS came with stunning graphics and serviceable gameplay. It was only up to the release of EA’s Star Wars Battlefront, that I had begun to notice a counterculture of reduced graphical fidelity in favour of artistic style and non-conventional gaming mechanics. Gone were the days of the typical duck & cover centric gameplay. More and more games surfaced, attempting to subvert the expectation of realistic warfare. Some doubled down on realistic gunplay but strayed from historical storytelling, such as Wolfenstein. Some stubbornly stuck to the same derivative gameplay but with a twist in design, including as the futuristic iterations of Call of Duty. The venerable Halo franchise opted to maintain its roots in over-engineered art style and simple, yet challenging gunplay. However, during this time there was one franchise that rebirthed from the ashes, subverting all expectations by reviving an archaic design philosophy grounded in the 1990’s. The game was called Doom (2016). Holding true to its visceral, run and gun, fast paced gunplay, the Doom franchise was rebooted by Id software and Bethesda, culminating in a resounding success. The creators of Doom thought that though story was important, and art style was essential, fast and fun action came first. The story was there for those that wanted it, but first and foremost, the designers made the game with action first with the philosophy they called “Push Forward Combat”. 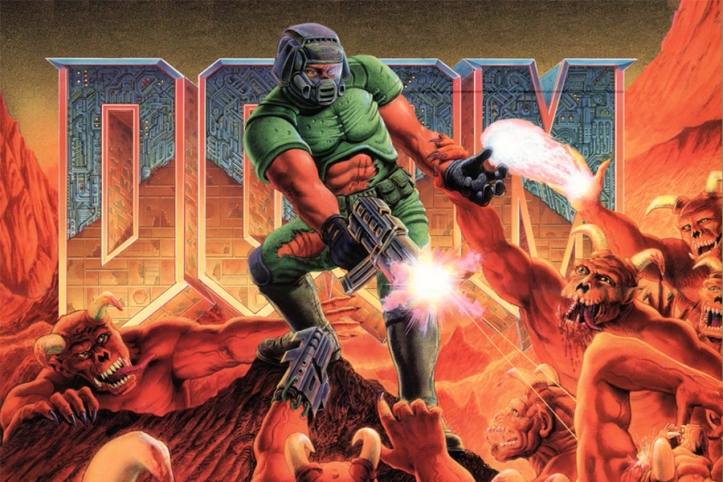 First off, we must discuss the meaning of “Push Forward Combat”. In Doom, it was always set out from the beginning, that you would play as the immortal Doomslayer, waging a one-man war against armies of hell. In essence, as the player, you would face off against hordes after hordes of demons seeking to halt your path of destruction and your main focus outside of the story was to make it to the objective by ripping apart everything in your path and succeed against all odds. To achieve what they called “Push Forward Combat”, the designers set up a system where they would feed you a constant stream of demons in the form of arenas. As the fight progresses, tougher and tougher demons materialize, pushing the limit of what a player would deem reasonable. The fight would feel borderline impossible with the amount of enemies and the lethality of them all. Nonetheless, it was designed with you succeeding in mind, feeding into the idea of constantly pushing forward. The arena-formula is not new, however the idea of pushing the notion of what defines impossible and possible to the limit allows the player to feel like every kill is one glorious step forward. 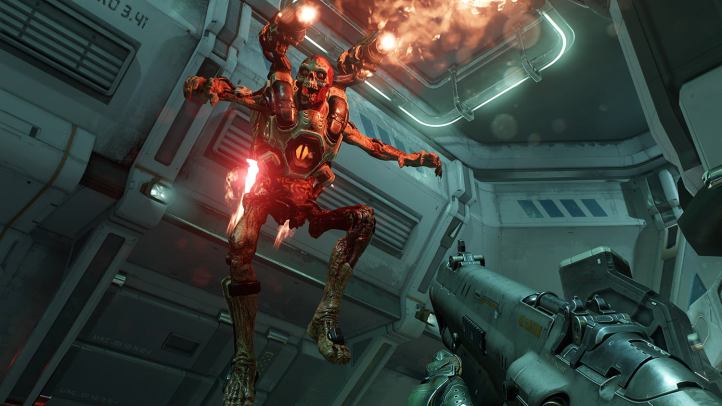 The gameplay of Doom is a function of music, viscerality, and responsiveness. The way the game feels to play is of the utmost importance in that it successfully establishes an adrenaline-fueled feedback loop of enjoyment. The musical score was produced by Mick Gordon, which uses a large degree of post processing and a variety of chained preamp modules to create a heavy, crunchy, industrial sound. The music was essential to the combat as it acts as an agent of adrenaline. The music complements the combat and everything falls in-sync, stimulating the players ego of self-inserted bad-assery for lack of better terms. The viscerality and the responsiveness, conveys the feeling of impact and power that no other modern FPS does, further feeding into the player’s power fantasy. The combat allows the game to always feel like its difficulty lies within the player’s playing field, despite the seemingly insurmountable odds. Every button does what is supposed to do, with minimal delay, every shot is pinpoint precise, and every ounce of recoil is carefully accounted for in order for the player to feel in control. The ammo counter was removed, opting for the removal of reloading, allowing the player to prolong the euphoria of violence without any breaks.

This combat goes against the commonly established trope of realistic combat. It spits in its face and breaks every rule pertaining to what is considered rewarding gunplay. And in its effort, succeeds spectacularly reflecting the gunplay philosophy of its past iterations and giving the FPS genre a well-deserved respite from constant constraints to realism and logic.

With this in mind, I feel like it is important to touch on what this means for the soon to be released sequel Doom Eternal. Based on the released gameplay videos, it is evident that id Software recognized what they did right and turned it up to 11. The player can now use a grappling hook to sling around the map, can use a shoulder mounted cannon to fire grenades or other supplementary war tools and a long wrist blade, allowing Doomslayer to cut his foes apart. To add my opinion, I personally prefer he uses his fist as the blade feels impersonal. Regardless, I feel like there is a lot to be expected from Doom Eternal and among them would be the return of “Push Forward Combat”, amazing musical score by Mick Gordon and also some revisions to the arena-based formula present in Doom (2016). Riding on the success of its predecessor, one can expect crisp and tight gunplay and another wild turn on Mr. Bones wild ride into hell. 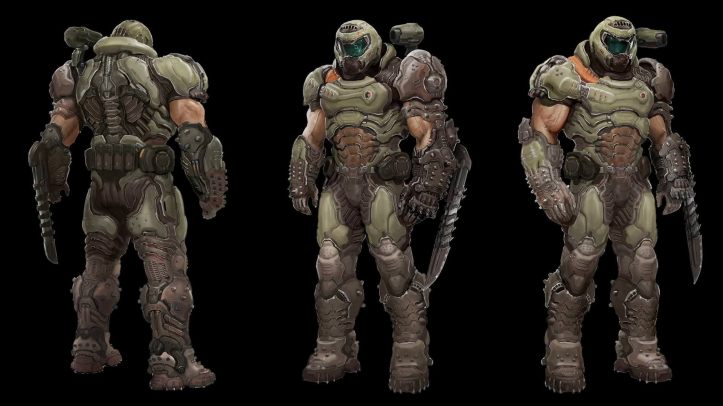 Doom (2016) redefined the FPS genre by showing that narrative, logic, and realism does not have to be the focus of a AAA FPS videogame. It has proven with its popularity and sales record that placing tight gameplay above all else in conjunction with good music and good controls, could be the award-winning trifecta in the modern FPS model. Already do we see the slowly diminishing love for the Call of Duty formula. Already do we see gamers fall out of love with the Battlefield formula. These games opt to attempt to take the market by a storm by catering to the most popular genre on the market: Battle Royale. However, Doom is the only game to stay true to its roots and once again prove that a multiplayer focus as well as good design philosophy is enough to sway gamers opinions away from poorly conceived and derivative FPS videogames.

Doom Eternal’s release date is to be determined, but I’m betting that we can see worldwide release within the year of 2019. So sit tight and hope to rip & tear alongside me in id Softwares Doom Eternal.