What Makes Elf So Timeless?

The first time I saw Elf was in the theatres with my younger brother, my older cousin, my mom, and my aunt.  I was about seven-years-old at the time.  I remember all of us could hardly contain our laughter throughout the film.  Every year since, I’ve ended up re-watching Elf by some means or another, be it during a family movie night, stumbling across it on TV in December, or when streaming it with friends during a high school holiday party.  What always stood out to me was that, no matter how old I was at the time, Elf would genuinely make me laugh and lift my spirits.  Even as my perspective of the film and the holidays changed, I would always end up feeling the same way as I did in the theatre when I was watching it for the first time.  I believe Elf’s timeless charm comes from the film’s ability to strike a balance between innocence and maturity. 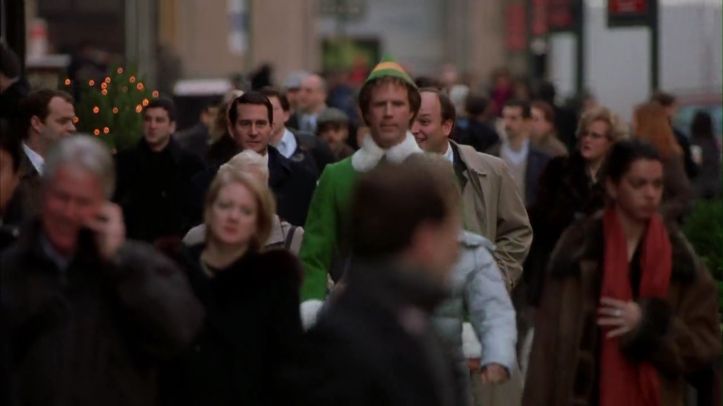 Before I go any further, here is a brief summary of the film for those who have yet to see it.  I will not be going into too much detail and highly recommend you still check it out if you are looking for a holiday movie to enjoy.  Elf is something that needs to be watched to be fully appreciated.  The story begins with Buddy (Will Ferrell).  When he was an infant, Buddy’s mother put him up for adoption since she and her husband were too young to care for him.  His father, Walter Hobbs (James Caan), did not even know Buddy had been born.  One night on Christmas Eve, Buddy crawls out of his crib in the orphanage, into Santa’s toy bag, and is unwittingly taken to the North Pole.  Once Buddy reveals himself, Santa (Ed Asner) is unsure what to do.  An older elf (Bob Newhart) decides to adopt Buddy and raises him as one of their own.  However, thirty years later, Buddy’s towering height and poor toy-making skills urge Santa to reveal the truth about his birth.

Buddy sets off to New York to reunite with Walter who, as you’d expect, is less than thrilled about the situation.  However, Walter’s hostility does little to dampen Buddy’s optimism as he starts his new life in the city.  Over time, Buddy warms the hearts of everyone he meets, including his step-brother Michael (Daniel Tay) and a retail worker named Jovie (Zooey Deschanel).

It seems that many Christmas movies tend to fall on either extreme of a maturity spectrum which I believe is equally harmful to viewers trying to get into the holiday spirit.  On one end, there are the childish Christmas movies that are either obnoxiously cheerful or overly sentimental with some shallowly-constructed message at their core.  Younger viewers take them in mindlessly and older viewers simply roll their eyes while watching them.  On the other end, there are the adult Christmas movies. These are typically vulgar comedies or dramas that corrupt innocent ideas and icons associated with Christmas.  These films will likely upset younger viewers and perpetuate any cynicism that older viewers might have towards the holidays.  With its premise, Elf had the potential to fall into either one of these categories.  However, it is executed in such a way that strikes a perfect balance between innocence and maturity that manages to engage viewers of all ages.  Part of this comes down to the way Buddy’s character is handled.  On one level, he is a perfect example of situational humour.  Buddy is a living parody of hallmark movies. It is hilarious to watch a grown man in tights strut around New York, reacting to things for the first time with childlike wonder, and seeing the incredulous responses he evokes from bystanders.

However, Buddy’s purpose as a character goes beyond mocking the wholesome mentalities associated with holiday films.  Even at his most naïve, Buddy is a caring person whose positive influence on others feels genuine.  Buddy never patronizes those around him by lecturing about Christmas spirit nor does he do some climactic act of kindness that suddenly restores everyone’s faith in the season.  By simply being himself, Buddy helps realistic characters with authentic problems reconnect with a sense of joy they had deep within themselves.  Take Jovie and Michael for instance.  Jovie is in her mid-twenties, living by herself, and working a thankless minimum-wage retail job.  Michael’s father is so busy working that he is never able to spend time with him, even during the holidays.  It is understandable why both characters are initially bitter towards Buddy’s perpetual cheer.  However, they eventually warm up to him as his good nature begins to shine through.  They progressively spend more time with Buddy until, finally, the audience sees them smile for the first time.

No matter how old you are, Buddy’s kindness is infectious.  Will Ferrell’s performance is phenomenal.

It should also be noted that the characters and scenes in Elf are written with all ages in mind, allowing children and adults to view the story from their own perspectives.  As a result, the film is able to mature along with the viewer, making it enjoyable for years.  When I saw the film for the first time as a child, Buddy was the most relatable character to me.  I didn’t see anything inherently wrong with the way he reconnected with his father, and was perplexed by Walter’s cold reaction to him.  As I got older, it made more sense why Walter would be apprehensive towards a thirty-year-old man walking into his office claiming to be his son who was raised by elves.  Similarly, the hard lives of Jovie, Michael, and the other people Buddy meets throughout the film did not really resonate with me until I  grew older.  What is most important, however, is the way the film seamlessly ties these mature undertones into the overall story.  Rather than diminishing the uplifting tone of the film, they support it.  Being able to recognize the harsh realities hinted at by the film ultimately makes its message about the good in everyone all the more impactful. 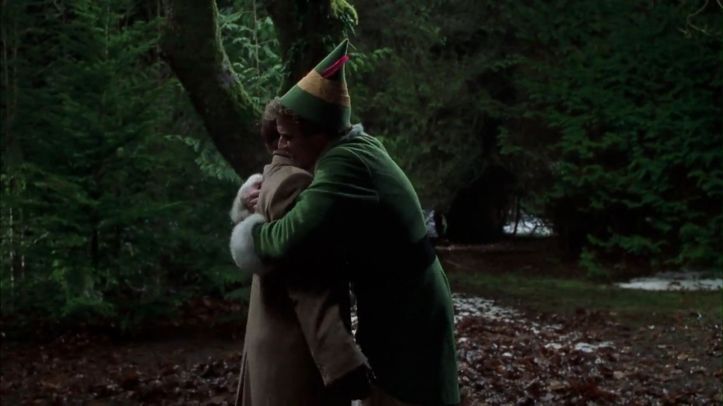 There is a scene early on in the film where Buddy is taking an elevator to Walter’s office for the first time.  He strikes up a one-way conversation with a clearly unenthusiastic stranger for the entire ride up.  Buddy reaches his floor, steps out and the doors begin to close.  Right before they close completely, he frantically turns around and shouts to the stranger “I forgot to give you a hug!”

Part of me always laughs at Buddy’s obliviousness to social conversions.  However, part of me also wonders what it would be like if there were more people out there with a heart as warm as his.  We hope you’ve enjoyed reading this article.  Happy holidays from The Vault!