I watched a Star Wars movie for the first time only 1 week ago. Don’t ask me what rock I have been living under, or what kind of meaningless existence I’d been leading up until that point. I know my lack of having seen Star Wars was a great shame and the fact that I have seen them now can only alleviate so much of the stigma. I will say, though, it gives me a perspective that should interest many Star Wars fans. Unblemished by childhood memories and uncorrupted by nostalgia, I watched with clear eyes the cinematic epic without any preconceived notions of quality. I may have known who Luke’s father was, I may have known what was going to happen to Obi-Wan Kenobi, but in the words of Domino’s Pizza, sometimes seeing is believing, and in the case of Star Wars, a bunch of meme clips don’t compare to the actual film.

However, I don’t want to talk about the main trilogy. I would instead like to discuss my fresh opinions on Star Wars Episode One: The Phantom Menace, for like a Domino’s crunchy crust alfredo pasta sauce and pineapple pizza, it is both a bizarre creation to behold and an unpleasant dish to stomach. I might as well start off by saying if you (like most people I have met) consider Episode One to be an abomination to the franchise, I agree with you; Phantom Menace is a movie whose overly crunchy foundation is none the less left soggy by a plethora of inept and half-baked ideas. You see, what I want to do is revisit a moment many would rather forget: that feeling of having seen those original films and then going straight into Phantom Menace, late at night with a group of friends running off of nothing but candy, pop, and Domino’s pizza. As much as my stomach ached during those moments, my eyes, ears, and prefrontal cortex were the pieces of me that really suffered that night. 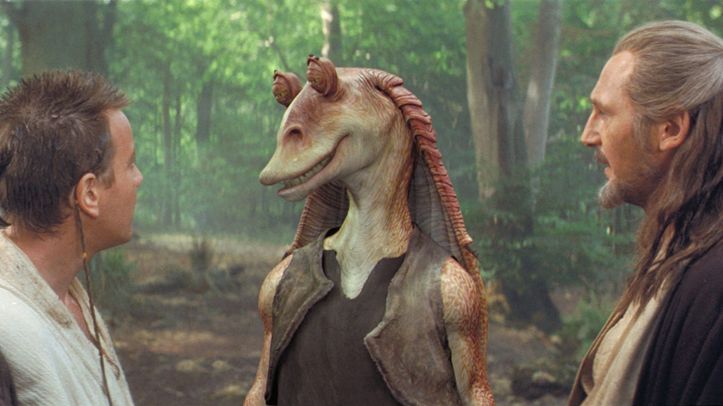 The premise itself is not problematic and, therefore, entices you like a Venus flytrap with its innocence. For those who have suppressed their memories of Episode One, Young Obi-Wan and the-Jedi-whose-name-I-forget are trying to end a trade blockade on a distant planet. Things seem suspicious and men in dark robes commands the traders to escalate the conflict, and boy does it escalate. The inciting incident itself feels rushed and far too quickly deteriorates into a lackluster lightsaber battle against some pitiful robot soldiers that look like duckbilled dinosaurs. There would be far more intrigue if we saw the traders getting commands but not knowing who was giving them. We would have cared more about Obi-Wan and other-guy if there had been a significant dialogue scene to introduce their personalities. Unfortunately, it seemed like the movie had places to go and little regard for if the viewer was along for the ride.

At this point, I must bring up the quasi-Jamaican salamander in the room. Jar Jar Binks gets a lot of shit (and steps into it because it’s funny…) but I don’t feel people fully grasp the problem he presents. Not only is his design as an alien lackluster, but his species as a whole are creatively wanting. An Atlantis-like people of salamanders that have a toad for a leader, who live underwater but possess a sophisticated land army? There are several criticisms that can be leveled on Jar Jar: aesthetic critiques, narrative critiques, comedic critiques, but they all fail to acknowledge that Jar Jar, like the queen, like young Anakin, like jedi-guy-who-I-can’t-even-be-bothered-to-google, like every character that this movie introduces, is uncharacterized. Expecting Jar Jar to be funny is like expecting a graphics card and litre of wasted sweat and tears to make a good comedy duo. Comedy and character are intertwined. If comedy is that which is unexpected, then how can you surprise the audience if there is nothing your character won’t do. Remember when Han Solo asked Luke if Princess Leia would be into him, and Luke awkwardly and far too quickly quipped, “No!”? That was funny because his character gives us a baseline for what awkwardness, speed of talking, and tone are, and therefore, we read between the now very thick lines. This would not have occurred if we didn’t know Luke. In addition, we wouldn’t care, which brings me to overarching problem two. 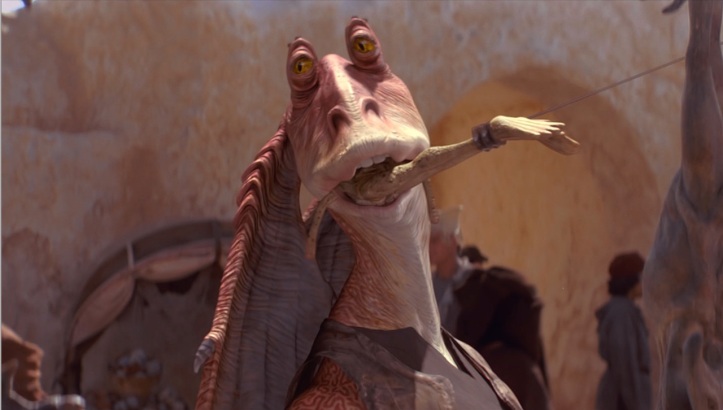 You may argue that my emphasis on character is disproportionate; many narratives rely on uncharacterized characters, but this only does so much to impede enjoyment. I agree; narrativity is built into us, and everybody loves a good plot. Unfortunately, Phantom Menace doesn’t seem to care about the ironclad conventions of basic narrative formulas. This isn’t a hero’s journey, for the journey is lackluster, meandering, and brings no satisfying solution. They just go back home and deal with the problem themselves. The entire journey itself was one big detour. Yes, I am taking an overly literal interpretation of the hero’s journey. As I said before, we have no characters; only cardboard cut-outs made from old pizza boxes. There is nothing for them to grow into except moldy pizza boxes.

All archetypes are cast out the window for what I call a “sports distraction subplot.” These beasts can be encountered in C and D rate fiction. The story has no connection to sports and sports-based competition, but for some reason, the characters find themselves needing to come victorious in a tournament or match in order for the plot to advance again. It is indicative of a writer who has no road blocks of interests to give the protagonists, or no solution to a problem requiring someone to lose out on something. The uninspired writer, therefore, uses a sports tournament as a way of either blocking our heroes or giving a solution to an unsolvable problem. Episode One uses the former, deciding we care for a child winning a race, because how else can a ship of their importance get a spare part?

As a final point, I wish to address the force itself. It is quite special how the original trilogy makes use of an undefined and unbounded magical force without throwing away any sense of expectation. The force itself is a smart combination of heady spiritualism and simple cognitive force of will. It was always a matter of what prevented Luke from using it. This focus of the quest to the magical power prevented Star Wars from falling to an unpredictable mess of magical nonsense. By keeping the strong principled and the weak far from the power, however, the magic system was never abused by the narrative. Then came midi-chlorians, and we are reminded of the simple adage, “show, don’t tell.” I would go a step further and say sometimes you should never tell, even when you can’t show, even when there is unknown, and especially if you have nothing creative and intelligent to say.

So, in conclusion, Star Wars Episode One fails due to possessing no interesting hook, no creative spark, no characterization, no narrative coherence, and so much superfluous fluff it stinks up the entire room like a medium alfredo sauce and pineapple pizza from Domino’s. But you know what? It may have been disgusting, and it may have made me gag, but I am glad I did it to at least say that I have tasted something so sour come from a producer that has made so many better things in the past. And for the record, I was talking about the pizza, not the movie.