Wow, the new Metal Gear’s been getting some pretty high scores across the ‘net, hasn’t it? Not that this is particularly surprising; it’s well-documented that big releases of classic gaming franchises tend to rake in 10’s like it’s nobody’s business, even in the face of critical fans left disappointed by the end product. Some days it feels as if the games press is beholden to some manner of eldritch entity that demands it be paid tribute by way of arcane rituals in the form of glowing reviews filled with intangible, vague praise like “visceral” or “densely packed.”

Recently, this disconnect occurred again for me while paddling across the ocean of acclaim Metal Gear Solid V: The Phantom Pain has gotten. I mean, it’s fun. I like it. But to see professional reviewers AS into it as they are came off as a bit of a surprise on second glace. Here’s a game that, to me, feels at once immensely satisfying and abundantly disappointing, with a handful of problems I’m reluctant to chalk up as just a matter of taste. Anyway! To avoid coming off as that guy who thinks they’re soooo much better than all of the “professional” games writers because they’re all look-at-me-I-think-Call-of-Duty-is-overrated-I-can’t-believe-you-hired-this-SJW-shill-give-me-the-job -no-actually-I’m-unemployed, let’s ditch the purple prose and get onto the game. 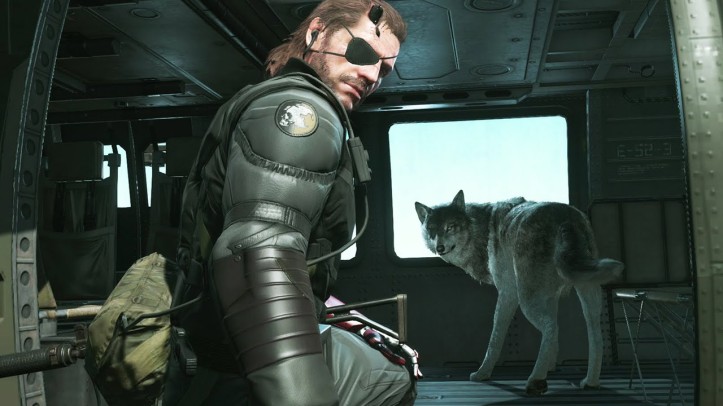 For those unaware, Metal Gear Solid is a series of stealth-centred games with anime plots about giant robots and cumbersome government agencies that flip-flop between good and evil so often you’ll forget where they actually land unless you feel like hitting up the bookshelves of Wikipedia. In practical terms though, this mostly amounts to games that see the player spending a lot of time looking at their character’s butt crack as they slink across the snow or ventilation shafts, using the odd cardboard box to avoid detection or throwing the odd porno mag to divert attention. These are beloved games though, so it should come as no surprise that these titles add up to so much more than that. To me, Metal Gear games are mostly about the collection of bonkers scenarios and weird codec conversation than they are about the individual stealth sections. While they’re not unfun – you’d be surprised how well even the PS1 classic holds up – the reason they’re thought of so fondly is mostly because they do a lot of interesting things that are typically uncharacteristic of videogames.

And so we come to The Phantom Pain, wherein we have a game doing things that are typically uncharacteristic of Metal Gear. The story segments are often brief and peppered sparsely throughout its 50ish hour runtime; an arsenal of heavy weaponry renders a stealth approach non-mandatory; and rather than being comprised of consistently unique enemies or set pieces, MGSV has a lot of what feels like the same thing dressed in slightly different pretenses. Of course, none of these things are bad, necessarily, but they’re a little weird if you’re just coming off of the other titles in the series. Still, what MGSV is at its core can be a lot of fun.

The vast majority of the game is comprised of individual missions that drop the player into one of two open world areas and ask of them to complete what’s usually a pretty straightforward objective – commonly “save/abduct X person” or “destroy X thing” affairs. But in what’s probably the best move MGSV makes, how one goes about that is usually up to the player. Feel like sneaking into the stronghold on your belly, unnoticed in the dead of night? MGSV has your back. Think it’s cool to crash an armored vehicle into the place and launch rockets at anything that moves? MGSV welcomes you with open arms. Plan on interrogating an enemy general so you can find out where that sweet sweet intel is at? MGSV gives you a pat on the head and a thumbs up. Wanna tell your dog to kill that man instead and spend the next two hours circling the map in hopes you’ll somehow stumble upon the information yourself? MGSV thinks that that’s probably not the best idea you’ve had this playthrough but is going to facilitate it anyway because it cares about you. 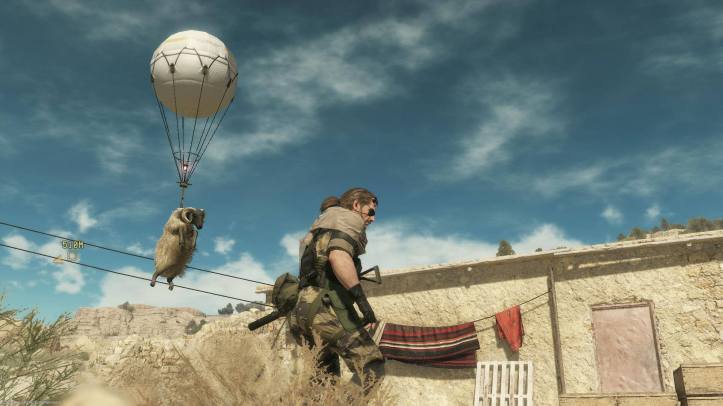 The sheer number of tools and potential tactics available for you to bring to the fight, combined with the nuanced ways in which guards react to them, go a really long way in saving what would otherwise be a crushingly monotonous and ill-composed structure for a lot of other games. See, there are 51 mainline missions and 150 optional ones, but the vast majority feel nearly identical: make your way through the overworld and into an enemy outpost so you can get the thing that needs getting or kill the thing that needs killing, call the chopper, run back to the chopper, and check out your mission list to see what’s been updated. Once you notice the game can be boiled down to these elements, it becomes a lot less appealing than the initial dozen or so hours. And honestly, you can tell the moment-to-moment gameplay is always working really hard to obfuscate this revelation.

“What? You’ve captured this guard post before? Uhh… whoa! Look at that! A new rifle can be developed! Haha… ha… Hey, listen. I understand this is the sixth ‘Extract the Highly Skilled Soldier’ side op I’ve asked you to do, but I promise this guy is like really, reaaally good at R&D so he’ll be a big help. And I knooow you’ve rescued a hostage from that camp over there before but I hid a bunch of fuel resources in one of its tents, and trust me, you’re gonna want those,” MGSV reassures you as you begin to question why exactly you’re out here again.

The thing is, this mostly works. On paper, you’re just out in the field again doing whatever busywork the mission listed for you on the select screen. But in practice, players will find themselves scanning for soldier levels, abducting vehicles, picking flowers, assigning staff members and deploying combat units all while working their way to the next waypoint. There’s a lot to consider, and dynamically choosing whether or not to take the easy route by killing a guard who’s about to discover you or risk kidnapping him in order to beef up your medical staff has you constantly weighing short-term difficulty with long-term rewards. MGSV badly wants to be the best incarnation of the modern open-world-capture-the-guard-post game to date, and while I haven’t played enough of these sorts of games to answer that with any authority, I’ll say that it does an excellent job trying. For the first 30 missions, at least.

As I’ve been hinting at, MGSV doesn’t have enough nanomachine-powered steam to keep up the intrigue past its first chapter. Once the second hits, we get a movie trailer-esque scene whetting player appetites for the thrilling conclusion in which the game will surely tie up the many, many loose ends it’s been showering us in like so many pieces of confetti. Except it doesn’t. Instead we get 21 missions that are mostly harder versions of the previous 30 and a whole lot of, “Is… is that it? Oh… I guess.” Like how Kojima said we’d all see and that we’d regret calling Quiet’s character design pandering and stupid – only to find out that no one saw because the game barely tries to explain why it’s not pandering and stupid, the “second half” makes a lot of big promises but fails to deliver on almost all of them. Chapter 2 is intensely unsatisfying, not only because the game’s formula begins to wear thin at this point, but in large part thanks to the nonsensical, arbitrary methods used to unlock the few remaining story missions, and the way the plot just sort of shrugs and goes “I dunno man” when asked about how it’s going to resolve things.

It’s a shame that the story doesn’t manage to come together in any way whatsoever – minus one very poignant scene towards the end, out-of-nowhere as it is. There are some glimmers of neat ideas here and there (mostly in the form of cassette tapes detailing things that the game doesn’t bother showing you), and a twist ending that may have been cool were it not delivered in the worst possible manner imaginable, but nothing comes together the way it does in other Metal Gear games. Yeah, it’s the 80’s so you have parasites causing many of the supercharged plot contrivances rather than the usual nanomachines; and yeah, it once again has a scientist who pees his pants in fear; and yeah, Psycho Mantis appears as a little boy in order to be supernatural and stir up some shit. But these elements seem lazily trotted out to make this feel more like a Metal Gear game, rather than, say, using elements evocative of the series to make some clever commentary in the same way that 2 and 4 did.

Another thing seemingly absent is the collection of bizarre boss fights fans of the series have come to expect. There are maybe two encounters in the entire game that fit the bill, which is a real head-scratcher. Though finally squaring off against Sahelanthropus while throwing everything you and your comrades have amassed over the course of your adventure was a really satisfying experience, this would have been a far better conclusion than the combat mission that caps The Phantom Pain off. And looking through some of the cut content provided by the collector’s edition, it seems like that was the original plan. Instead however, getting to the true ending requires players fight their way through a godawful mission where they’re asked to take down wave after wave of heavily-armored, one-shell-and-you’re-dead tanks that always know where you are and never seem to stop coming.

To me, MGSV works best when you play it as stealth game filled with interesting, interactive tools, but has serviceable action elements in case you’re stuck in a bad situation or just feel like playing it that way. But there are a number of missions that – for one story contrivance or another – include situations where you have no option other than fighting your way out. These segments ditch the open-ended approach to things, and pit you against threats you may not have developed the gear to adequately battle head on. And though comparatively few, these missions are no doubt a big damper on the overall experience.

As a summation, MGSV feels a little inferior to the other games in its lineage (to me, at least). Even though it probably feels the smoothest and is arguably the most “fun” of the litter, the game lacks any real or memorable moments. And since it’s a grand attempt to stand as the current King of Sandbox Games, I feel like it’s not going to age as well as its brothers and sisters have in the long run, because every other AAA game is after the same thing. It’s just a feeling, and I’m not willing to put money on it or anything, but I think we’re all going to look back at 1-4 with a little more appreciation and reverence than this one.

Still! A lot of people already had and probably would have a good time with the title. I did. This article was more or less an exercise in detailing some of the issues not addressed in a lot of the professional criticism, so forgive me if the tone has been kinda pessimistic, okay? Even though fans have – very cleverly – been pointing out that the game left them feelin’ a little phantom pain of their own due to glaring omissions and the fact that it’s pretty obviously unfinished in some respects, Metal Gear Solid V: The Phantom Pain has enough highs to be worth looking into.