Ame to Shoujo to Watashi no Tegami

Unlike most short anime that I’ve seen, Ame to Shoujo to Watashi no Tegami (The Rain, the Girl, and my Letter) is more narrative-heavy, with its artwork placed second in priority. While it puts an interesting twist on the “love confession in a shoe-locker letter” setup, its subpar art was distracting, and it was too short to convey anything meaningful. There isn’t really any subtle symbolism or greater message, but anyone who’s ever felt heartbroken over a rejection will probably relate well to our protagonist, and find appeal in her reaction. 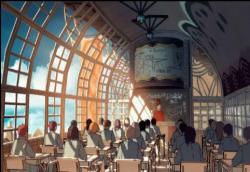 Despite some mediocre drawing, the style in which the environments were crafted were unique, if only because they seemed so out of place. A conversation which took place in a sort of classroom looked as if the room were afloat, almost like the inside of a flying zeppelin. Most of the story takes place in a book store, and if not for the fact that it was, well, lined with books, the store itself had the architectural stylings of a feudal Chinese palace. Even the clock, whose ticking the anime devotes quite a bit of time to, is absolutely bizarre in appearance, looking more like an ancient compass than something that’s actually comprehensible. Furthermore, the instrumental track playing in the background contributes to the outlandish setting. Over the sound of clockwork and heavy rain, the music goes from a standard strings piece to a cacophonous mixture of steel pan drums and xylophone.

As previously mentioned, the anime’s short length prohibits any sort of meaning, despite being riddled with dialogue. Towards the end of the short film, an interesting character appears, only to contribute little to the story itself. However, this little girl, dressed in a traditional chinese outfit and living out of a suitcase (which seems to have its own sink, bed, dining table, and shelves) could probably have an anime adaptation of her own.