No Game No Life: A Review

I like short anime – anime that are 12 episodes long. The reason being that they let me somehow justify in my head the binge watching rampage that I’ll go on with the all-too-familiar phrase, “Well but it’s only 12 episodes”. These anime are the ones to steer clear of in the midst of exam season, when watching anime probably isn’t what you should be doing. But time and time again, I’ll find myself a very alluring short anime and won’t really be capable of restraining myself for the next day or so as I watch episode after episode until the very end.

This time, I decided to watch No Game No Life, this fantasy/adventure anime that I would probably loosely describe as a Sword Art Online/Code Geass/Mirai Nikki hybrid with added adjustments. The plot follows two NEET (Not Employed in Education, Employment, or Training) siblings named Sora and Shiro, who spend all of their time gaming under the joined account of “Blank”, or more accurately “[ ]”. Together, they are undefeated in the gaming world, and are source of numerous urban legends floating around the internet. Despite their success online, the two siblings find themselves disappointed with the world they live in, which fails to have any clear objectives or patterns to find, and are left with thoughts that they were “born in the wrong world”. However, one fateful day, they receive an email that leads them to an online chess game. After beating their opponent, they are offered the chance to live in a different world, one that is governed by the outcomes of games, known as Disboard. From then on, Sora and Shiro begin to explore the fantasy world they have been transported to, facing a whole roster of new and challenging opponents, as they learn more and more about its rules and the 16 intelligent races (known as the Exceed) that also reside on Disboard.

I finished the anime in a day, which wasn’t my intention at the time but, well, it happened. The anime draws you in from the start. That is:

(1) the siblings are rather likeable and occasionally comedic from the start;

(2) the concept of a world where games decide everything is pretty irresistible;

(3) the visuals are pretty good on their own.

That was enough to motivate me to power through episode after episode. But I shouldn’t assume the same of you, dear reader, so I’ll flesh out my thoughts of the anime a bit more.

The two main protagonists (Sora and Shiro) are geniuses, to say the least, akin to Lelouch from Code Geass or Light from Death Note. They have an innate talent for figuring out how to win any game or curve ball thrown at them, no matter how impossible it may appear to win, which can be exciting and exhilarating for some, though tried and uninspired for others. The back stories of Sora and Shiro aren’t fully fleshed out, to the extent that we would normally see in a 25+ episode anime, with the anime adopting an approach that focuses mainly on the quickening pace of the plot and surrounding characters. As a result of this, there isn’t as much depth to Sora and Shiro as could be desired, which can be forgiven given the clear direction of the anime and the limited number of episodes. You get a little more feel for the thoughts and feelings of side characters, but definitely not to any appreciable extent. However, given the cliffhanger ending, there seems to be potential, leaving possibilities for more development in the plot (which by the end of the last episode is left with loose ends) and further insight into the characters if the anime continues. 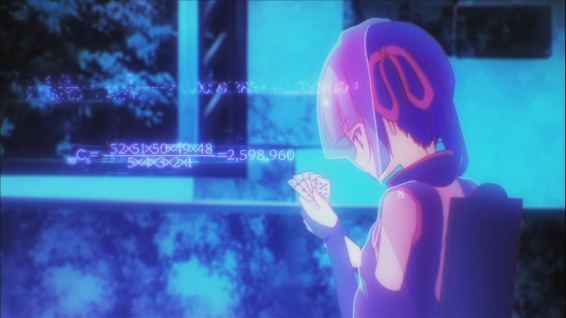 I had some concerns before starting the anime, especially whether there would be some weird incestuous moments between siblings (as anime sometimes like to include). Fortunately, this wasn’t really the way the anime presented itself. The siblings love and take care of each other, but in a purely platonic way. The overwhelming amount of fan service in this anime result in a few panty shots of the younger 11-year old sister – but this in no way hints at an incestuous relationship.

Speaking of fan service, there’s a ton of ecchi in here. Lots and lots and lots. This could dissuade you from watching the anime – understandably so – but it’s so blatant that it borders on comedy many times. This anime encompasses so many genres that I’d hate to really label it as any one thing. Yes, there is ecchi in it, but there’s comedy too, and so I appreciate that you don’t really need to take any of the fan service seriously. What was a little misleading when I first heard about the anime is that I assumed that being transported to a “gaming world” referred to gaming in the strictly virtual sense. Opponents who wished to challenge each other would be warped into a virtual sandbox, where they would fight and outwit each other with cool abilities and moves in a sort of massively multiplayer sort of thing. What you get instead, however, are people playing intense games of chess or poker, with fantasy and magical elements thrown in there to spice up the games. Anything can be turned into a game – even a simple match of rock paper scissors can be used to resolve bets. This in no way was a disappointment for me, but just a slightly unexpected turn for me as I delved into the episodes. In a way, this distinguishes the anime from other similar anime like Sword Art Online, which also has characters in a gaming world, albeit in a much different way.

The animations and character design were good, so I had no complaints there. The only aspect that didn’t particularly stand out to me was the music. Epic themes are scored for the game scenes, but are ultimately nothing that I would deem noteworthy.

Overall, I was a fan of this show. As I see it, this review is incomplete as the show itself was ended in a way that (I hope) suggests that there is more to come. Yet still, if you can get past a lot of the fan service, you’ll be certain to enjoy the exciting game matches, comedic relief, and rich fantasy world that is Disboard. So, let’s all have fun and dive into the world of No Game No Life!