I’m sick of high school animes. There is nothing specifically wrong with the concept of having a story take place with high school aged kids going to high school. I do occasionally enjoy high school animes, and have gone out of my way to defend Chuunibyou demo Koi ga Shitai! as a shining example of a good high school romantic comedy. But the “high school this or that” genre has many a crime it must attest to. High school in anime is bland, unexciting, unoriginal and in most cases feel either like a generic plot mechanism to structure a story or a poor attempt at luring in the youth crowd. With that whining out of the way, I give you Golden Time! And all I can say is that times are bad when not being set in high school is a merit towards a show… 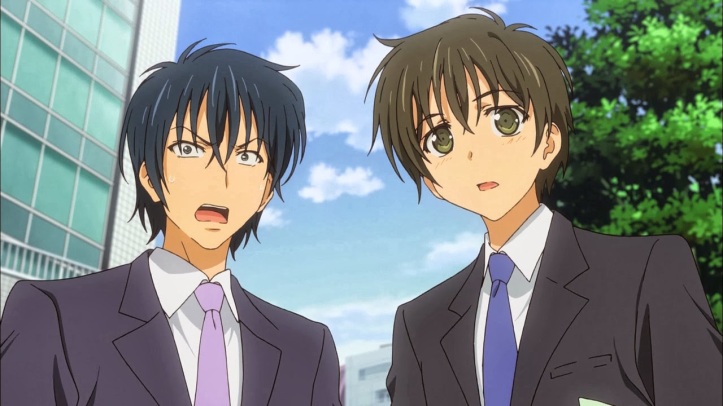 You heard it here folks. Golden Time is a university romantic comedy. University! Like, the institution I am currently going into absurd sums of debt for!  The place from which I am currently writing this review. If you have been following anime for any span of time you know the university setting is an untouched oasis of creative potential. So, when in the fall of 2013 an anime called Golden Time presented itself as a university romantic comedy with the assumed implication of taking a much more mature and realistic portrayal of life and romance, I was excited. Now, this 24 episode anime has ended, and I shall present to you my decision on whether or not you should approach this with the eager joy that I did. Let’s begin.

I would start with the plot description, but in my opinion all you need to know is summed up in the words “university”, “romance” and “comedy”. With regards to each of these categories it delivers stellar performance. Initially I was worried the show would use the university setting superfluously as an alternative to high school and copy over the same cardboard cut-out characters and immature antics; fortunately this is not the case. The setting felt distinct and unique compared to the un-scalable mountains of generic high school anime I have watched, and the entire atmosphere of the show had a very mature vibe without compromising the comedy; an excellent achievement if I do say. But the most notable achievement of the show is its characters. 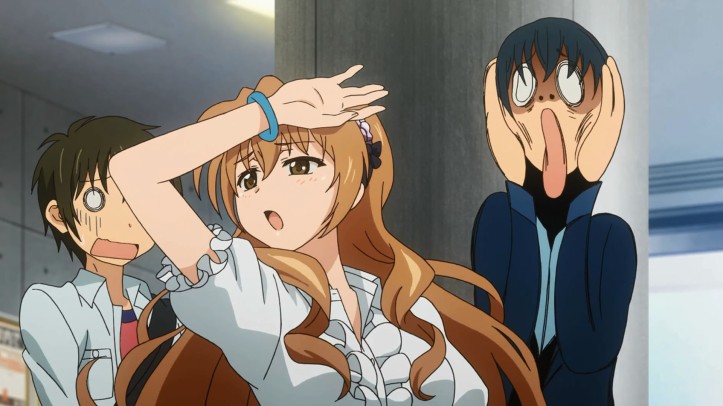 The characters are a breath of fresh air, and the entire cast manages to feel original and likable. The most astonishing aspect though, is how dynamic they are. These characters don’t follow simplistic notions of character traits, they instead change and alter their behaviour based on the moment, and as a result feel very unpredictable. Many might consider this a negative factor, saying the show lacks character continuity. But the characters of Golden Time reminded me of the dynamic behaviours actual human beings exhibit; and when considering the mature vibe of the show it is much more reasonable to see the characters as depictions of the real world rather than symbols of poor writing. The fact that they use highly dynamic characters and manage to pull them off in the framework of the show is, in my opinion, utterly shocking.

If there is one other thing that is shocking about Golden Time, it`s the lackluster animation. I went so far in my earlier review as to say that most modern anime have good animation, but Golden Time definitively proves me wrong. It wasn’t so much how motion would feel choppy at times but how some scenes didn’t have enough frames to depict the motion they wished to. I remember specifically two accounts in which our female lead would be shot from behind, then there would be a cut to a shot of her from the side as she bent her head down. What was truly bizarre was that afterwards the show would cut back to another shot of her from behind, but would reuse the same frame, making it appear that she never moved her head at all. This is simply unacceptable, and not only reveals the lacking budget behind the show, but confuses the viewer to no end.

What else is there to say? Neither of the opening themes were sensational, but I did like the use of harpsichords throughout the soundtrack and the songs for both ending themes. Otherwise the OST is standard fare.

It must seem at this rate I quite liked Golden Time and would strongly recommend it to you. Unfortunately, I can’t. I wished for many a day that Golden Time was everything I wanted it to be, but it has one immense flaw. I want to express it to you, but it treads on the realm of spoilers. As a result, if you like everything I said so far and want to give this unique piece of anime a try, then go at it. Otherwise, below is the reason why Golden Time is far from perfect:

Golden Time had built itself up a lot with the concept that Banri (our main character) had lost his memories. Instantly I thought to myself that this seemed like a very unusual and uninteresting plot point, but then it hit me: the use of amnesia in the way they had presented it had SO much potential. It seemed like an amazing conduit to exploring typical feelings of people going into university. It seemed the perfect allegory for wanting to forget the angsty and juvenile past self of high school, and create an all-new you in an all-new environment; pushing your past self into the deep dark corner of your subconscious, never to be seen again. As a result it seemed a perfect way of addressing the subject of growth and change while at the same time dealing with the issue of having to come to terms with your full self. That’s why when I initially saw ghost Banri, I hated him, but given time to think I saw it as the perfect way of presenting the past self that you wish to never remember again. It looked SO promising as to where they were going to take it. I had assured myself the final episode would be a giant pool of complex ideas about accepting who you were while becoming the person you want to be. I was ready to dive into what I thought would be one satisfying conclusion.

When I took that dive, I broke my face on the kiddy pool I found myself in. The final episode was horrendous. The issue of growth and self-reconciliation never appears. In fact, nothing deep appears at all. The ending was the bare minimum of what an ending is expected to do. As a result it left me utterly irate since they had developed all the plot threads to lead to one very insightful and satisfying conclusion, and in the end they squandered all of their potential.

I, for the longest time, was adamant that the use of amnesia in Golden Time was an excellent allegory, but after that final episode I had to accept the facts. Golden Time’s use of amnesia is nothing more than a convoluted plot mechanism.

So to put it simply, Golden Times biggest fault is one of the most common faults found in anime, a bad ending. But for Golden Time it meant so much more since its ending promised to explain so much and as a result left so many loose ends. It is the show’s greatest tragedy, and a point I simply can’t ignore. In conclusion, Golden Time represents the direction the anime industry should be heading; a direction involving new, mature settings with novel and creative ideas. In addition, the kids who grew up watching Dragon Ball Z and Naruto have grown up and want anime that meets their demographic. While I would like to hold up Golden Time as the perfect symbol of this new paradigm shift, its faults keep it from attaining this status. This results in Golden Time receiving an ABOVE AVERAGE… out of 10. It is a show that has at least one standout quality to make it worth your time.

There are many more anime that have come to an end this spring season, so expect more reviews in the ensuing weeks. Till then, see you.