I bet you don’t know, but I’m all about keeping up with the Joneses, as they say. So when I heard The Vault’s new March theme was about music in multimedia, I immediately and unquestioningly jumped on the bandwagon, wanting to keep up my appearance as a hip and happening writer who’s in on the latest trends. From this desire of wanting to fit in, I have decided to review the prolific music anime K-On!, in the hopes that my strong sense of conformity will bring me but the simplest recognition from my peers, and maybe even, if I’m lucky, they will go that extra step to say that I have done a “good job”.

Ok, hopefully you can infer that the statement about me being into trends was sarcastic. But what about the other statements I made? Is K-On! a show about music or not? Am I going to be using this post to write a review on it or will this page simply digress into a cat thread? Well, I think I’ll leave these questions unanswered. After all, my English prof said that manipulating reader expectation is what makes good writing; and considering I’m slowly descending into an unspeakable abyss of debt just to hear his opinions, I might as well use them.

To start things off, the statement that K-On! was an anime sure isn’t a lie. It is an anime; an anime about a group of girls who are part of the schools keion-bu (light music club) and want to make a band. So you would also think it is an anime about music. To this point though, things get complicated. To help you understand let me give some context. 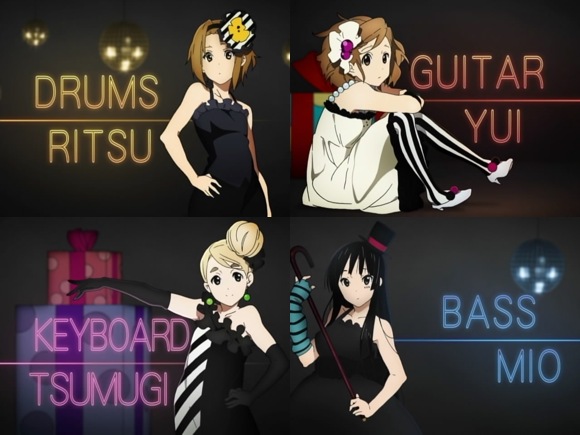 K-On! was a 2009 anime by Kyoto animation presenting top notch animation and the patented Kyoto Ani moe-cute character art style. But this ain’t ‘yur grandma’s kinda moe kids. K-On! represents an evolution in the art of moe itself.

I don’t think you fully understand, so let me take some time to spell it out to you.

The moe of K-On! is a substance whose purity and composition is of an unquestionably high quality. But attaining this final product was not easy. Kyoto Animation staff spent hours on the streets of Akihabara finding only the most ideal otaku specimen. Upon sighting one, they harpooned and reeled in their scrawny otaku subjects into their completely inconspicuous large white vans. Contained now in their testing chambers, the otakus were given questionnaire after questionnaire on the nature of kawaii and the meaning of moe. Their brains were examined while looking at moe girls under MRI, fMRI, EEG, CT, and PET scans. They were kept for 3 months; fed on a diet of nothing but Lucky Star, until they had reached a perfect state of inner kawaii harmony, after which they were slaughtered auspiciously. From here the process of moe extraction commenced. The raw combination of wholesome moe and antisocial Japanese male was then left to ferment for 4 years. The product was then strained of any pieces of otaku flesh and the filtrate was sent to the Kyoto Animation Center for the Advancement of Cuteness in Media. There the filtrate was analysed through all of the most advanced means of molecular analysis for the purpose of extracting a near perfect, pure moe product. They ran seize exclusion chromatography to refine the moe. A sodium dodecyl sulphate polyacrylamide gel electrophoresis was run to separate the proteins of moe. Over 1000 assay plates were hand pipetted by Kyoto animation’s personal slave labour brigade of intern animators for the sole purpose of advanced moe analysis. Nuclear magnetic resonance spectroscopy determined the structure of moe. Selective infrared absorption determined the composition of moe. The moe kinetics, enzymatics and thermodynamics were studied in precise detail until finally, after endless otaku blood, animator sweat, and kawaii tears, the moe product obtained was the most pure to ever grace the presence of the anime world.

TLDR = K-On! has the moe-est moe I have ever seen. 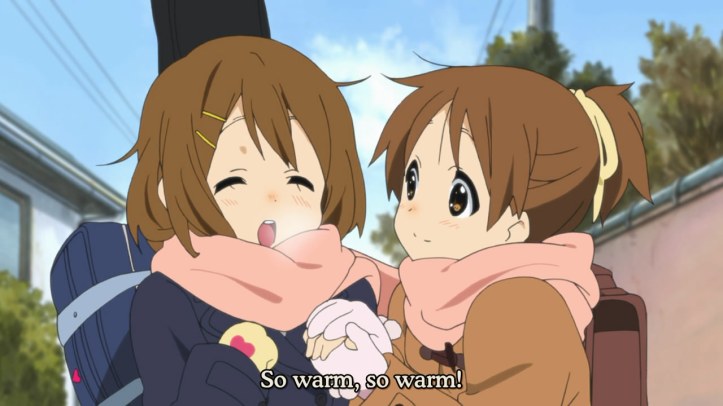 But the moe of K-On! was not only revolutionary in its composition but revolutionary in its use. K-On! is one of the first animes to definitively start the “moe genre”; an off-shoot of the slice-of-life genre, fixating on not just the lives of characters, but the cuteness of those characters in those lives. But you may ask how can you make a genre out of nothing but cute girls? Simple; make the cute girls do cute things! It’s ground-breaking! It’s progressive! It has changed the very face of anime as we know it! But is this a good thing?

I would say the most grievous flaw of K-On! is that it’s nothing but an anime about cute girls doing cute things. The plot is very superfluous and always takes the back seat when the girls decide to do cute things. Adding to the issue, character development is very weak. To put it simply, nothing really happens. Even though I watched K-On! only a few months ago I can’t really remember what happens. I remember the beginning, I remember the end, but everything in between is but a blurry smear in my brain, consisting of nothing more than high pitched screams and massive eyes.

Hopefully you see now that K-On! might be an anime about music, but it is far from a music anime. Music is used as a talking point, as vehicle for which the silly antics of the cast can be based around, and all intriguing discussion about music thrown into the backseat. The cast will do things like go to the beach with the premise of making music (hint, hint: there is far more beach than music in this episode). The cast will go to the store to buy a guitar (nudge, nudge: no songs shall be played with this guitar for quite a few episodes). The cast will celebrate Christmas and… Ok, absolutely nothing in this episode has to do with music. In the end the anime could have in based around any club or activity imaginable, and this above all is the greatest disappoint levied by those who have seen the show.

Hey, hey. Wait a minute. I may have revealed the secret but the review is far from over. While K-On! isn’t a music anime per say I still feel it has merits that must be stated.

K-On! is in my opinion an very well done story of friendship and optimism. While the girls drink tea far more than play their instruments, the story of them getting to know each other and forming friendships together is relatively endearing. It is in this regard the (very limited) character development is used explore the friendship dynamic, resulting in a wholesome friendship that, while being far from revolutionary, is still enjoyable. In addition, while their depiction of the music world and starting a band are so fictional it’s absurd, the way the story intertwines their fears with a not-that-scary world gives a very uplifting breath of happiness to anyone not too cynical to enjoy an anime that reminisces in childhood innocence. 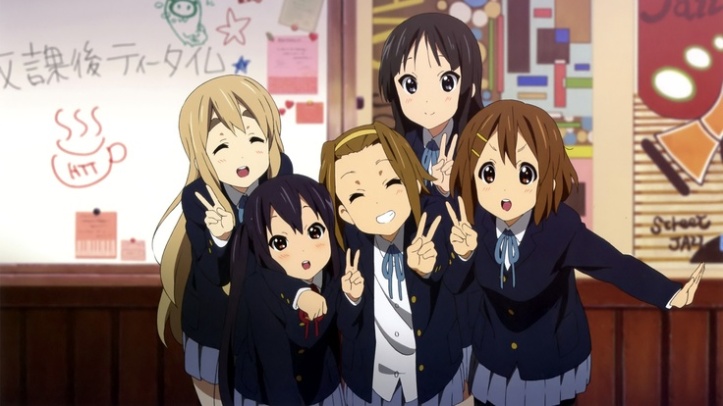 On the other hand, one could place the blame on K-On!’s marketing. For a show that uses music so superfluously it never seems to give any indication of this to the would-be viewer. The cover of the show’s DVD set, the advertisement posters, they all show the main cast playing music (something that very rarely happens in the show). Every plot description talks about the girls wanting to form a band, never about the girls wanting to eat cake all day. It’s hard to say who exactly is in the wrong, but hopefully by making this review you at least won’t have to suffer from this problem.

In conclusion, K-On! represents a fairly well done optimistic story of finding ones place in life amongst the people who care about you and doing that which you love. The handling of these topics is far from astounding, but regardless will satisfy anyone who simply wants a story that will put a smile on their face.

Oh, and since everyone wants me to rate the show on some kind of scale or in some kind of category, I have prepared this. After taking all the factors of K-On! for categories such as characters, plot, sound, animation, enjoyment, length, width, mass, taste, topography, teleology, and how much the show made me want to have a cup of tea, I assembled a differential equation.  Solving for it, assuming moe in the solution, results in a function that leaves me awarding K-On! with an ABOVE AVERAGE… out of 10. It is a show that has at least one standout quality to make it worth your time to watch. Now with that done, and my sense of belonging reaffirmed, here are bunch of K-On! images involving cats. Enjoy, and see you next time.