If you have ever finished a video game, manga series, anime show, TV series, or book (series), chances are at one point in your life you wished that the settings, as well as the characters, were real. Why is that? You may think it’s due to various personal reasons influenced by the environment in which you grew up, or the people that you chose to associate with throughout your life. In reality, however, this desire is based on a psychological trait that you have attained through hundreds of thousands of years of primate evolution: want, desire, and lust. Try as you might to prove me wrong, but every action, decision, and thought you’ve had throughout your life was influenced by your desire for something, although what you desire may not always be tangible. For example, if you make friends it’s because you desire companionship, if you go to college it’s because you desire knowledge and the prospect of a better and more successful life afterwards, if you watch a movie it’s because you want to be entertained, and if you eat food or drink water or buy clothes it’s because of your desire to, well, not die.

This brings me to our monthly theme for February- romance and everything I listed in my opening sentence. The reason why we like some stories to the point of wishing they were real is because they are rarely realistic and are often romanticized versions of real life. The term romanticize or romanticizing a subject, according to google, is defined as “deal with or describe in an idealized or unrealistic fashion; make (something) seem better or more appealing than it really is”. They often present characters or situations that you can relate to and resolve them as simply and ideally as possible. This creates a hopeful and overall happy experience for you, the audience. However, this is not to say that all stories are happy and simple, this is just to say that we are drawn toward those that are (the entertaining ones anyhow), and for the ones we are drawn to that contradict this notion – all I can say is that they have to be incredibly thrilling and well-made (I’m looking at you, Game of Thrones).

As an audience member you would be enticed with a good plot, even more so if the characters are portrayed well. Often times after a film you would take some time to reflect and ponder questions such as ‘what if this happened’ or ‘the movie could’ve ended so much earlier if this this and this happened’ which brings up another point- people enjoy and feel comfortable with subjects or objects that they can manipulate and control, which is why videogames are incredibly popular, specifically Skyrim. This is because within Skyrim and games like it, such as Fallout and Oblivion, you are the main character and therefore the most important and powerful person in those stories. You can liberate cities, slay mythical creatures, or even (first save the game) kill (or pickpocket) every last innocent civilian you come upon. This stems from our need for power as the more power you have the more you can control and it is thrilling to be able to control super soldiers (Halo), Ghosts (Between 2 Souls), entire armies (Starcraft 2, Total War), or even a fat drug addicted plumber if the game is made well enough. 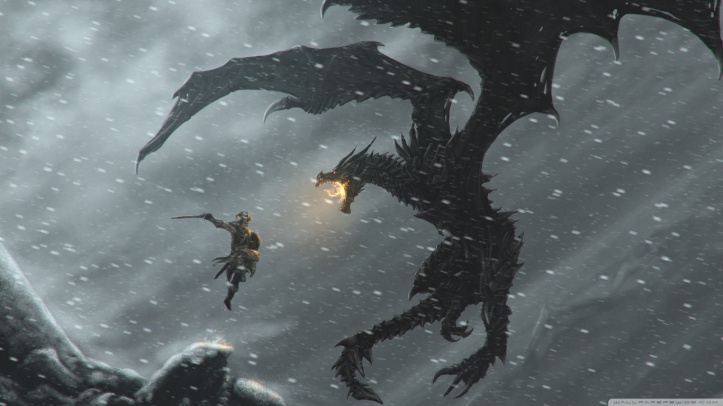 Indeed, manipulating and controlling characters is fun, but sometimes observing them from the viewpoint of a ghost, watching the characters or group of character’s every move, listening into every conversation, being able to understand the inner turmoil that appears in every character and watching how everything unfolds can be much more intoxicating. This is why some people may even fall for completely fictional characters; they understand them in their entirety (maybe just to a point), something that can only be accomplished in real life through years of constant intimate and often unnerving interaction. However, it only takes a few minutes before you decide if you like a character or not, and although that may change as the plot continues you cannot break the bond, the established fictional foundation upon which you choose to judge the character’s actions, that you have formed with said character. Now you will continue to do this for every single character you meet. Some may die, some may go away, and some will stay with you through the rest of the duration for which you choose to play/watch them. However, no matter how many new characters you meet, whether it’s in a game or TV show or anime, you will always have a small group of favorites collected from each piece of work you have indulged in and enjoyed, with which you will have one that you like more than any other, and that will last forever. Such is life.

You will come across many people, all with a different story, and of those you will only get to know and remember a small portion of. But from that group, you will only like an extremely small and close group of friends that you have judged and deemed worthy of opening up to, these may include friends and family, all of whom have contributed to your growth and saved you from something one time or another, and it is from this group that you will have to choose your favorite that you will stay beside forever. That is the one who will make you happiest, the one who will save you in your time of direst need, and the one that makes this game we call life worth living. That is your one true (evolutionary speaking) objective. Now proceed with your journey.